Last week I attended the 3rd annual Lunar Science Forum (LSF) held at the NASA Ames Conference Center.  The 3-day meeting sponsored by the NASA Lunar Science Institute (NLSI) dealt with topics "of the Moon, on the Moon, and from the Moon."  The LSF was one of several lunar- and space-focused meetings during the week that also included the LunarGradCon, Next Generation Lunar Scientists and Engineers Workshop (NGLSE), Lunar Exploration Analysis Group (LEAG), and NewSpace2010.  I want to thank the NLSI for providing the travel grant that made it possible for me to attend the meeting.

After introductory speeches from Ames Director Pete Worden (whom I know from ISU), Jen Heldmann (whom I know from the PSSS), and others, science journalist Andrew Chaikin delivered a very engaging an opening talk titled "Luna 2.0." One of his slides showed the LROC mission patch, which says in Latin "Science enables Exploration. Exploration enables Science." That sentiment really set the stage for the conference by giving a broad overview of how the new suite of missions studying the moon are producing some great science and paving the way for future human and robotic exploration.

In collaboration with Carol Stoker, I presented a poster titled "Iterative Science Strategy on Analog Geophysical EVAs." The abstract is available online here, and you can view the entire poster below. The LSF poster expands upon some of the work I previously presented at LPSC a few months ago. The main purpose of this new poster was to showcase the fluid nature of conducting field science and how crews on future planetary missions will need to bootstrap their way along as they learn new things on each EVA. Such a strategy lends itself well to permanent bases where you have the luxury of being able to continually return to sites of interest to conduct followup field measurements. Sortie style mission scenarios may not allow for this kind of iterative strategy and therefore may not yield as much science return.

Presentations in the morning on the first day dealt with the latest results from the LRO and LCROSS missions.  Afternoon talks addressed lunar drilling, the (network formally known as the) International Lunar Network, strategies for planetary geologic surface operations, astronaut training needs, and even the Mars Desert Research Station, where I spent 2 weeks earlier this year.  One really popular talk was eloquently given by Pamela Gay on Moon Zoo, which is an exciting new web application that allows anyone to help scientists look for and classify interesting features on the Moon. The day wrapped up with the presentation of the Shoemaker Award and briefings by the directors of the NASA Science and Exploration Systems Mission Directorates.

On Day 2, I attended the Geophysics and Biology session during the morning.  Maria Zuber gave an excellent overview of the outstanding geophysical questions on the Moon and how we need a combination of orbital remote sensing and ground-based human and robotic missions to help answer them. Other talks delved into how ground penetrating radar, laser altimeter, seismometer, and radiometric data contribute to the geophysical picture of the Moon.

In his introduction to the biology part of the session, Chris McKay spoke about the importance of life science to lunar exploration. He made the point that humans tend to only bring plants with them when they travel to a new place intending to stay there. When we start taking plants to the Moon or Mars, that will signify when we're there to stay.  This is one reason why one Google Lunar X PRIZE team plans to take a plant to the Moon within a few years.  In the session, I learned a new word: "astrophycology", which means the study of algae in space. Algae could play an important role in ecological life support systems, and there are a number of nanosat missions in the works to learn about how they deal with the challenges of the space environment.

I had to leave the LSF meeting after lunch on Day 2, so I missed the second half of the meeting, which delved into greater detail on topics such as lunar poles, sampling, geology, and geochemistry. To see more impressions people had during the meeting, check out its twitter hashtag #lsf2010.

Attending the LSF meeting was a highly valuable experience for me. The range of topics in the talks and posters helped broaden my appreciation for the cutting edge science being done with lunar data. I was able to meet with friends and colleagues I've known from Washington University, the International Space University, past planetary science meetings, and Astronauts4Hire. I forged new relationships with potential future collaborators on several different projects too, so there may be more great research and field work opportunities for me in the future. As always, stay tuned to this blog for my latest adventures. 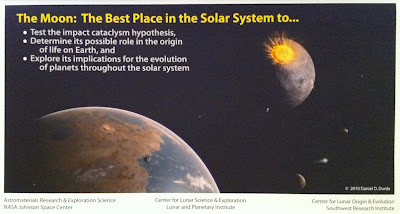