August 09, 2009
In addition to my seismic and electromagnetic projects, I made other significant contributions to the FMARS 2009 mission, including creating our mission patch and all of our EVA maps. In this post, I'll describe the maps. These are more more than mere geographic illustrations since they include georeferenced photos, heart rate and other information. My main goal was to integrate geotagged photos and GPS tracks within the geographic context of Google Earth to help the interested public share in our experiences.

To accomplish this, one first needs geotagged photos. Last year, Wired Magazine had a good article introducing the concept, and an Outdoor Photography article summarized the concept nicely:

Geotagging is a way to add location or GPS data to your photos to help you organize, search, find and share your images. In the past, it was difficult for even the most advanced photographers to geotag images. There was a patchwork of technology that could do it, but it was by no means easy. Recent technology has taken geotagging mainstream, making it accessible to all photographers.

Several photo-sharing services like Flickr, Picasa, Locr, Panoramio, EveryTrail, and iPhoto Places allow users to manually select the geographic position of each photo on a map or upload already geotagged photos. An excellent review of some of these and tutorial to GPS tagging is here. Manually geotagging photos is a tedious task that quickly becomes intractable with more than a few photos, so automating the process was a requirement for me. There are two main ways to automatically geotag photos:

The advantage of cameras with built-in GPS is that you automatically get geotagged photos with no additional work. The most widespread GPS cameras today are in high end smartphones like the iPhone, but "real" consumer-level GPS cameras are starting to become available. The Nikon Coolpix P6000 camera is the first affordable GPS-enabled camera ($420). It won the Backpacker Magazine 2009 Editors' Choice Award due to it's built-in GPS and ability to capture crisp, color-rich photos. I wrote Nikon a letter describing the FMARS expedition and my idea to use geotagging cameras to document it. I asked them to become a sponsor by donating six P6000's and they agreed. Here is a picture of the crew holding the Nikon banner in front of the FMARS Hab: 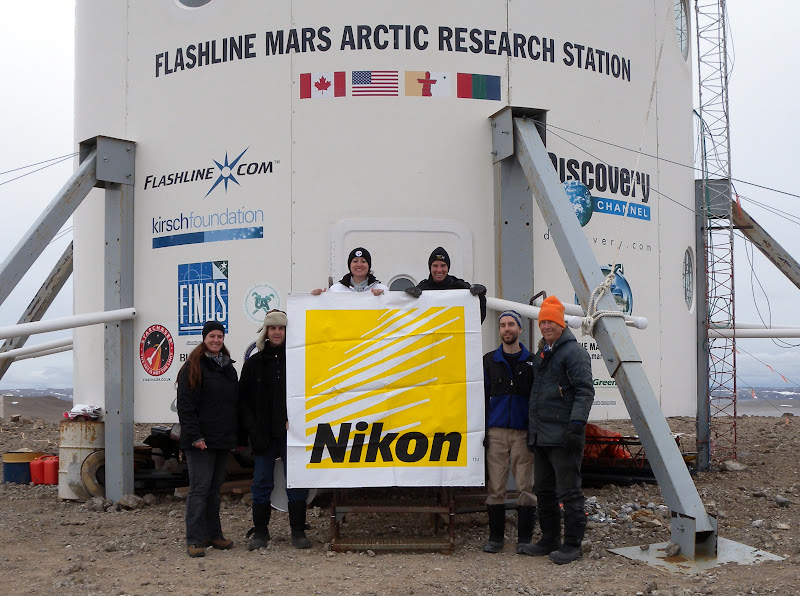 The following three paragraphs with blue text dive into alternatives to having an automatic geotagging camera. You can skip past this part if you want.

This GPS functionality can be added to SLR cameras too. For example, Solmeta offers three models of its Geotagger hotshoe accessory that work in a number of SLR cameras from different brands. These even work indoors and have built-in compasses for telling you which direction you were facing when you took a photo. The Nikon GP-1 is a similar accessory that adds geotagging capability to most Nikon SLRs for about $210. Another interesting product is the Garmin Oregon 550, which combines a GPS, PDA, camera, altimeter, and compass all in one rugged waterproof device. It could be a really handy field information management tool worthy of testing at FMARS, but its camera features are too lightweight for high-quality results (only 3.2 megapixel with 4x digital zoom), so I opted not to pursue it.

If you use a camera with an integrated GPS or one of these hotshoe accessories, the camera should automatically write the latitude and longitude information into the photos' metadata. The other way to accomplish the same thing is to sync a GPS track taken with an external GPS with your photos. Photographers have used this trick for years, typically with GPS data loggers, which are small film-caniser-sized devices that continuously record GPS position and time. By comparing when a photo was taken with the position recorded by the GPS data logger, one can figure out where a picture was taken. Luckily, there are a number of software packages to make this relatively easy: GPicSync (Win/Mac/Linux), GPSPhotoLinker (Mac), or GeoSetter (Win). As long as the user is diligent about making sure the camera and data logger clocks are synced before starting the photography session, this process works well.

There are many GPS data loggers on the market. The Amod AGL3080 ($61) or GiSteQ PhotoTrackr CD111 ($84) might be the best ones since they're Windows- and Mac-compatible and aren't too expensive. More models are reviewed here. You can even use an iPhone as a GPS datalogger with one of several apps: 1, 2, 3. An alternative to using GPS to geotag photos is the Eye-Fi Explore Video or Pro SD card, but you have to be within a wi-fi network - definitely not an option in remote places like Devon Island.

But I digress... I was supposed to be telling you how I made our FMARS EVA maps.

Geotagging photos and associating them with GPS tracks is very useful both operationally and as an outreach tool. I think this practice will soon become the standard on field excursions, both on Earth and other planets. User-friendly wristwatch-sized GPS devices like the Garmin Forerunners make it a snap to monitor crewmember distance traveled and to generate breadcrumb trails of their EVAs. The integrated heart rate monitor is a good proxy for the more substantial biometric monitoring that is built into real space suits. I recommend that all future FMARS and MDRS crews learn from and improve the mapping techniques I described in this post.

If you'd had enough techno babble and just want to sit back and enjoy a good show, check out this Google Earth tour of Hawaii, complete with music. You can even pretend to be a ship captain piloting a barge or cruise ship on any river or ocean here. These showcase some of the fun capabilities of Google Ocean.
Earth FMARS
Location: Devon Island, Baffin, Unorganized, Nunavut Territory, Canada