July 27, 2009
For my last EVA, Christy joined me in retrieving the seismic station we had installed earlier at Marine Rock. We left the Hab on an overcast day between rain showers and managed to stay dry for the duration of the EVA (#15). A quick 15-minute drive later, we were at Marine Rock.

First, we inspected the station to make sure it was running properly. It was working fine with an impressive 16 V charge on the battery despite the overcast conditions. I shut down the station, and we started digging out the seismometer. Joe took a panoramic video of the area, which you can see on our YouTube channel.

When I pulled off the cover, I saw that the vault had flooded with over an inch of standing water. I had chosen the site because it was dry and not near any uphill snowbanks, but I guess the soil didn't drain well from all of the rain we'd been having. The robust little Trillium Compact was no worse for the wear, though.

While Christy was taking down the tower, I wound up the cable between the station electronics and the antenna. Unfortunately, I was never able to get the Ethernet radio link to the station working, so we couldn’t monitor the data in real time. Despite this problem, I count the seismic experiment as a big success since Christy and I were able to deploy and retrieve the equipment wearing space suits. Astronauts will likely have similar types of seismic systems to deploy on other worlds, and this work shows it is feasible. 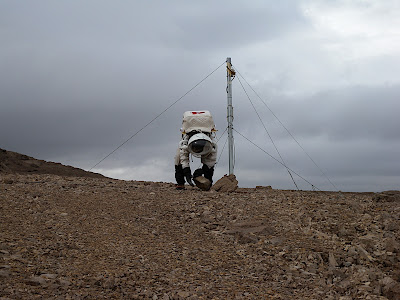 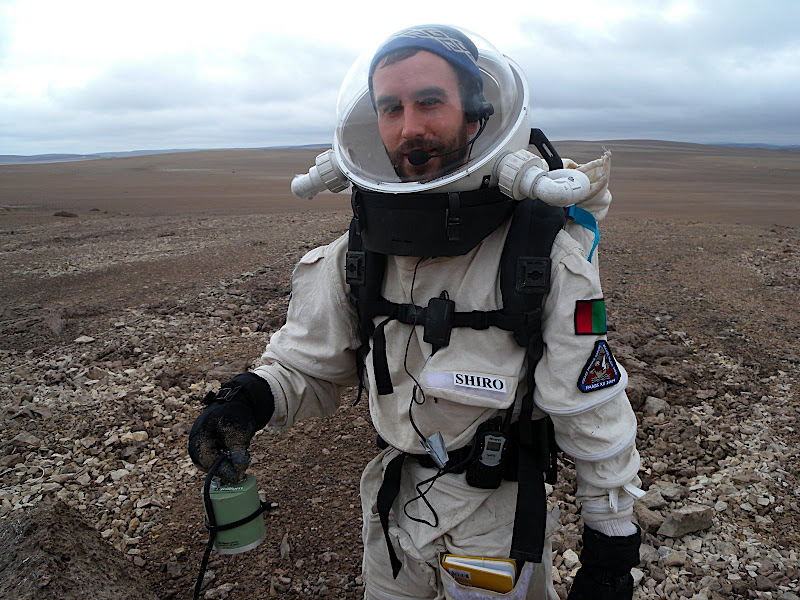 Stay tuned to a future post, where I will share how I combined GPS, heart rate, and geotagged photo information in Google Earth on all of the FMARS EVAs.
FMARS
Location: Devon Island, Baffin, Unorganized, Nunavut Territory, Canada

spacepoint said…
TO me, being an astronaut is a dream come true. Space exploration is the future, our future, it could bring important discoveries, that will change the course of history.
03 August, 2009 02:54