November 04, 2011
Imagine giving up 520 days of your life to spend in isolation with five other people confined inside a cramped cylinder about the size of a semi trailer pretending you're on a mission to Mars. That's what the intrepid crew of the Mars500 Project just did. During the 74-weeks of their mission, which included a simulated roundtrip journey to Mars complete with a short surface excursion, the crew carried out more than 100 experiments to assess the effects of isolation on their psychological and physiological well being.

The international crew ranges from ages 27 to 38 and is comprised of three Russians (Alexey Sityev, Sukhrob Kamolov,Alexander Smoleevskiy "Siev"), two Europeans (Romain Charles of France, Diego Urbina of Italy-Colombia), and one Chinese national (Wang Yue). They "landed" on Earth at 14:00 Moscow time (10:00 GMT) today when the hatch to their sealed habitat at the Institute of Biomedical Problems (IMBP) was opened for the first time since June 3, 2010.  After emerging, each crewmember gave a brief statement to the crowd of dignitaries, scientists, and the media. Seven minutes later they were whisked away for four days of medical quarantine. They will gain full freedom on November 8 following a press conference. You can watch the hatch opening video replay or learn more on ESA's website. 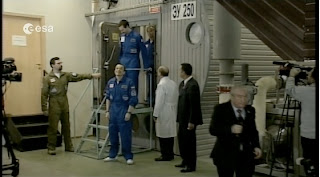 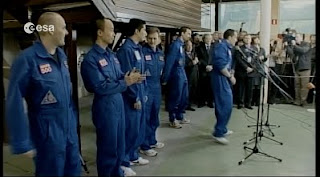 Throughout the virtual voyage, crewmembers kept a video diary. ESA has edited together the highlights and compressed 520 days into 15 minutes in the video below. It gives a good sense of what life was like for the mock Mars explorers and the close bond they formed. My hat's off to these dedicated marsnauts for persevering with such humor and grace. I hope this experiment leads to other higher fidelity studies to prepare us for the day when we are ready to venture to our red neighbor planet. It's even rumored that astronauts on the ISS may take a lesson from Mars500 and do an isolation experiment in orbit.


In other recent Mars news, ESA's Mars Express just completed its 10,000 orbit of the red planet, NASA's Mars Science Laboratory rover Curiosity is now at Cape Canaveral being readied for its November 25 launch, and Popular Mechanics gave its Lifetime Achievement Award to the twin Mars Exploration Rovers Spirit and Opportunity, the latter of which is still exploring after more than seven years. NASA also confirmed that it remains in the planetary exploration business, despite Robert Zubrin's alarming opinion piece in the Washington Times.

Ecommerce said…
I hope this would be a success! Having people on mars is a great deal of experience.
10 November, 2011 04:44