There and back again with Mars500

With conventional propulsion technologies, the trip from Earth to Mars will take about 6-8 months, depending on the trajectory and mission plan chosen.  That means a round trip visit to the Red Planet will take at least a year and a half.   How will people cope with the psychological factors on such a long journey?  This is the central question asked by the Mars500 Medical Project, which began today.

Six dedicated people locked themselves in a Moscow hangar, committing themselves to a 520-day isolation study to simulate a mission to Mars.  The experiment builds upon 14- and 105-day studies that were carried out in 2007 and 2009, respectively.  The program is run the Russia's Institute for Biomedical Problems (IBMP), which has a long history of conducting experiments supporting human spaceflight.  The BBC had two really nice articles this week on the Mars500 project here and here.  You can learn about Mars500 in the following video:

Mars500 Resources on the Web:

Mars500 simulates a full opposition-class mission to Mars.  This mission scenario requires a large amount of energy to be expended in transit and involves a short surface stay of only 30 days.  That is why it is usually not favored by Mars mission planners.  However, for the purpose of Mars500 it makes sense due to their goal of studying group dynamics and human factors.  The 520-day mission timeline includes a 250-day outbound trip, a 30-day simulated surface stay, and a 240-day return.  The milestone dates are as follows:

The mission takes place in IBMP's Medico-Technical Complex, which consists of living, working, and storage modules connected by tunnels.  It's also connected to the "Simulator of the Martian Surface" (SMS) module, which provides 1200 m3 of volume with a simulated Martian surface environment where the crew will conduct simulated EVA operations in the pressurized Orlan-E spacesuit.  You can see photos of the crew trying on the suits here.  A video tour of the complex is on the Mars500 YouTube channel: part 1 and part 2.

Keeping the crew alive on mission to Mars will be a challenge due to the persistent microgravity and radiation exposure throughout the interplanetary journey. Many bed rest studies have been done to address the issues of physical deconditioning due to the lack of gravity. Humans have also undergone spaceflights with durations similar to a Mars mission. Cosmonaut Valeri Polyakov holds the record for the longest single space mission. He lived on the Mir Space Station for more than 14 months (437 days, 18 hours) from January 1994 through March 1995. Cosmonaut Sergei Krikalev is the current record holder for the most number of total days spent in space at 803 days and some change. When astronauts return to Earth from long missions in space, they are weak and often require days and even months to recover. No one really knows how well humans will function when they arrive on Mars after having spent so long weightless in space. That's why spinning the spacecraft to produce artificial gravity should be seriously considered as a countermeasure, unless we figure out a way to get to Mars faster.

Some people say that psycho-social issues will be a show-stopper for deep space exploration.  One reason Mars500 is so important is to show the world that such problems are not insurmountable.  While a human mission to Mars will be a momentous occasion, perhaps our greatest achievement ever, it won't be a first for long duration exploration.  From the great Polynesian migrations, to the great sea expeditions during the Age of Exploration, to polar exploration in the 1800s and 1900s, human history is full of examples of heroic expeditions spanning many years.  Perhaps the best analogs for a long duration space mission are extended submarine missions or Antarctic traverses because the crew is confined to a limited space in an environment that will kill them if they go outside.  Thus, I have every confidence that the 6 crewmembers in the Mars500 experiment will fare well. 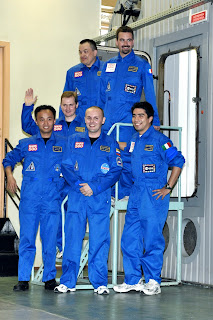 The Mars500 crew consists of three Russians, one Chinese, one Italian, and one French crewmember.  I had the pleasure of meeting the Italian Diego Urbina (@diegou) during the crew changeover for my MDRS mission in January.  He was on the outgoing Crew 88, and I was on the incoming Crew 89.  He made the 3D MDRS drawing I showed in a previous post.
They were paid about €20,000 for training and will reportedly receive €80-90,000 upon experiment completion.  The crew's commander Alexey Sityev just got married, so he and his new bride will spend their first 18 months apart.  Talk about a honeymoon!  I think the only way my wife would let me do a mission this long would be if it were actually going to Mars.

Perhaps you too can't afford to take 18 months out of your life to train as a marsonaut.  As luck would have it, the Mars Desert Research Station (MDRS) is now accepting applications for its 10th field season.  You can apply to be a crewmember on 14-day rotation in the Utah facility simulating a Mars surface habitat.  As someone who recently completed a mission there, I highly recommend it to all aspiring off-world explorers.

hope things are well and you've got your cowboy boots and doing your 'second-order neurons' research.

[Hello to Luis when he's got the opportunity].

PillowNaut said…
Great list! Their YouTube videos are awesome... I'm so excited they've finally come to the 520-day sim! They may prove, medically and psychologically, we could make long-duration trips... then again they may not -- but fingers crossed for success! :)
09 June, 2010 08:08