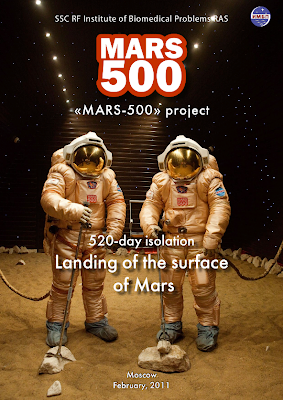 In 1914, the famous Antarctic explorer Shackleton purportedly posted an add to recruit his crew that read:

Nearly 100 years later, the same could be said for the first volunteers to explorer Mars. With conventional propulsion technology, it will take about 8 months of floating in the cold blackness of space just to reach Mars. Dangers like radiation exposure and physiological deconditioning are big uncertainties, as are the pyschological effects of being in close quarters for so long.

Addressing these challenges, the European and Russian space agencies launched the ambitious Mars500 Project last June.  Since then, six crewmembers have been locked up in a simulated interplanetary spacecraft pretending to be in transit to the Red Planet. With over 100 scientific experiments on the mission, it's the longest and most rigorous study of the isolation and confinement humans will face under long duration space mission conditions.  Click on the image to the right for a complete PDF overview of the Mars500 Project.

Just like my FMARS and MDRS simulated Mars missions, they observe a strict 20-minute communication delay with "Earth" and only take showers once per week to conserve water.

Italy’s Diego Urbina and Russia’s Aleksandr Smoleevsky had the honor of being the first two crewmembers to perform a 1 hour, 12 minute EVA on the simulated Mars surface earlier today.  Wearing real Russian Orlan-E spacesuits, Urbina and Smoleevsky took soil samples and planted flags in a sand-filled room meant to resemble the lakebed sediments of Gusev Crater, the landing site of NASA's Spirit rover.  Urbina's first words on the alien landscape were recorded in an ESA press release:

Europe has for centuries explored Earth, led by people like Columbus and Magellan.  Today, looking at this red landscape, I can feel how inspiring it will be to look through the eyes of the first human to step foot on Mars.  I salute all the explorers of tomorrow and wish them godspeed.

You can watch Urbina and Smoleevsky in a video of the first Mars500 EVA:

Two more EVAs are scheduled for February 18 and 22.  On February 23, the 3-person landing party will launch from the Mars surface where they will dock with the orbiting mother ship on February 24.  After 3 days of quanrantine, they'll reunite with their three other crewmates and prepare to leave Mars orbit on March 1 for the 8-month return journey to Earth, where "honor and recognition" are sure to follow.

Oh, and since this is Valentine's Day, click on over to Universe Today and check out the many hearts on Mars!

PillowNaut said…
Shackelton's quote is particularly apt, as everyone knows any true pioneering steps may turn out to be a one-way trip. I'm honestly no less riveted with this than I would be with a real Mars voyage -- this speaks volumes for how dedicated some folks are, and we should all be so proud of these chaps for giving up such a huge chunk of their lives for science. I'll bet if we did one of these in America, you'd sign up for it, wouldn't you, Brian! =)
15 February, 2011 05:37