September 11, 2009
A few days ago, the Augustine Commission released its Summary Report (pdf, html) reviewing the U.S. human spaceflight program. In a nutshell, they recommend that NASA needs $3 billion more annually to maintain its planned human space exploration program and that the gap in U.S. human launch capability will be at least seven years. The first two sentences of the 12-page document set the ominous mood:

The U.S. human spaceflight program appears to be on an unsustainable trajectory. It is perpetuating the perilous practice of pursuing goals that do not match allocated resources.

With this bleak budget outlook and the reality that 19 new AsCans are now in training at NASA, CSA, ESA, and JAXA, the space agencies are not likely to be taking any additional recruits in the foreseeable future. What does this mean for Astronaut Hopefuls (AsHos) like you and me? First, let's review the report.


I like how the Augustine Commission stressed that planning a human spaceflight program should start with choosing goals rather than choosing destinations. The destinations and technologies needed to support them will follow once the goals are made clear. NASA's goals haven't been clear for decades. The bold conclusion of the Committee was that the "ultimate goal of human exploration is to chart a path for human expansion into the solar system." That's certainly a worthy goal, but how do we get there? They considered the following five key questions:


It comes down to this: Either NASA gets more money allowing U.S. human space exploration to expand beyond LEO, or it doesn't. We've spent $517 billion bailing out failed industries, $790 billion in Iraq, and countless more on other wasteful government programs. The U.S. spends a staggering $2 billion per week in Iraq alone! Surely a measly $3 billion per year can be found somewhere to shore up NASA's shortfall. We need to be investing in science and technology to spur job growth, improve education, and regain American competitiveness on the world stage. That's the kind of change Obama supposedly represents. I hope he steps up to the plate and delivers. 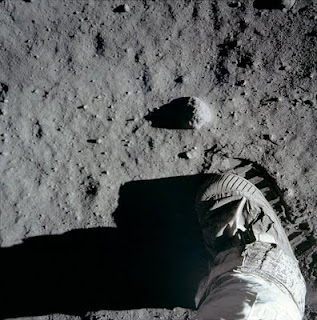 When will astronauts next put bootprints on another planetary body? We're at a crossroads in space exploration. Given the country's problematic economic situation and focus on other issues like health care, can we really expect space to get the attention it deserves? After all, the Augustine Commission report hasn't really garnered much mainstream media attention yet. Perhaps NASA won't get a funding increase and will be forced to scrap the Constellation program, setting us back years.

However, if NASA administrators, Congress, and the President take the Augustine Commission report recommendations to heart, we could see the birth of a truly new era of human spaceflight. We'll establish a base on the Moon, visit Mars, and start learning how to really live and work beyond Earth. The demand for talented people will spur an Apollo-like bump to our economy and create opportunities for astronaut hopefuls to join in the fun. I'll see you there.

Here is what another astronaut hopeful and reader of this blog, Curt Holmer, has to say:

What does this mean for the AsHo group? Well to me, it means that we are looking at least a 5 year gap until the next selection and probably longer. With the ramp up of commercial industry it may be fair to say that the best chance for people in this group is with the private sector, but will probably be more in the realm of pilots and flight crew rather than scientist types. This will be especially true if the operational lifetime of the ISS is not extended, or if adequate funding isn't allocated to allow the new National Laboratory to reach full and productive capacity.

With everything that's on the country's plate right now it’s hard to see that space exploration will get the necessary boost in funding if it’s not lucky enough to be able to keep at current levels. Given how shuttle launches barely make the news anymore, and you sure as heck don't see any coverage of ISS Crew launches from Russia, unless we find something to ignite the country's interest in space science this is going to be a very tough job even for the commercial sector.

Does this mean that I'm going to give up [trying to become an astronaut], heck no. ... We need to be a leading voice in why this is important both for our country and for our species as a whole.

What do you think? What is the outlook for astronaut hopefuls in the next 5-10 years?

Curt Holmer said…
An excellent post and summary Brian, bravo!! Thanks again for including my comments as well.

I too was surprised by the dismissal of the Commission of Mars as a viable near term goal since their job was to consider all options. Maybe the full report will address why this wasn't a viable first destination.

Whole hardily agree on your budgetary summary; that was one of the most frustrating things about the Bush Administration's empty support of NASA by giving it lofty goals but no funding. It will be interesting to see what if any reaction that this commission gets out of Congress/current administration. Despite the high cost of this commission, I think it should be a once a decade thing to make sure that we are indeed on the right track and have a viable/realistic plan for achieving our stated goals and objectives.
12 September, 2009 11:07

Garry Livesay II said…
The outlook for the next 5-10 years is the same as it is today: Out of the thousands that apply, we seek to be one of the very few chosen.

Admittedly, there will be a lesser need for astronauts since the next program will not be sending 6-7 astronauts up every few months, but in no way will that change our ambitions to become one.
13 September, 2009 16:45

Unknown said…
Brian, I am thinking the future really does lie with the commercial sector, and I am a reformed skeptic on this matter. What has convinced me is the fact that 2 companies have flying hardware: SpaceX and Bigelow Aerospace. This is far beyond the PowerPoint stage and very exciting. As NASA was able to orbit Skylab in one fell swoop, it is not a stretch for Bigelow to put up a larger, human-rated space habitat. They've already paved the way with a smaller prototype. Now you have a place to go. As for SpaceX, although they have a long way towards having a human-rated booster and capsule, they have also come an enormous way in a very short period. It's quite possible if both these companies succeed, we have a method of transport and a destination. This becomes a viable path to a robust space tourism industry. Over time, I would expect the launch rate to skyrocket, which is the only way the cost per pound to orbit will drop significantly. This was the economic rationale for Shuttle that was never realized because of their low launch rate. Getting into space could rapidly fall from the realm of millionaires booking empty Soyuz seats to an affordable option for us mere mortals. Food for thought...
14 September, 2009 16:32

Unknown said…
I feel that a mars-first strategy is too far of a stretch. I feel that the best move is to establish a permanent moon base. I'll list the several advantages:

1. It's closer. Communications are faster, resupply will be more available, and the cost of delivery will be much lower than sending stuff to mars.

2. Explorers on the moon won't be as deep in a gravity well as they would be on mars. Bringing things back home will be much easier. I feel that this will be an important factor, as it will lend itself to commercial exploitation of minerals (helium-3, anybody?) or anything else we find.

3. Establishing a base on the moon will be easier and will involve fewer engineering challenges. I've read that construction on mars will have to deal with things such as shifting ground, dust on solar panels, and extensive peroxides capable of corroding composites (and flesh). On the moon, the main challenge is the gritty dust that clings to things. Sandblasting from rocket exhaust is a secondary problem.

Asteroid mining is also something that could be a worthy goal, but I think it would best support a moon base rather than directly returning minerals to earth (delta-V issues).
21 September, 2009 06:35