June 21, 2009
A couple of weeks ago, I wrote about my FMARS training activities such as shotgun and ATV practice. Since then, it's been a nonstop marathon to prepare for the arctic adventure. This includes not only all of the logistical planning but also fund raising and purchasing gear. 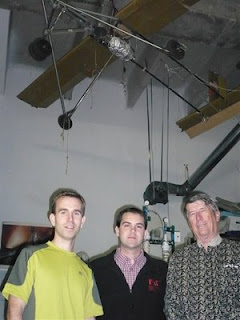 The preparations are building to a crescendo now in the final days before we all depart.

Last weekend was the first opportunity for all six crew members to meet each other, Dr. Zubrin, and The Mars Society volunteers who will serve as our mission support. We also met with a representative of the production company that plans on filming our arctic adventure. The FMARS crew spent Saturday and Sunday at Pioneer Astronautics near Denver to discuss critical issues related to our expedition. The picture to the right shows myself, Joe Palaia (Executive Officer), and Vernon Kramer (Commander) posing with a prototype Mars aircraft ("gas hopper") in the Pioneer Astronautics lab. A press release outlining this meeting, which will be soon be on The Mars Society website, is reproduced below:

Lured by the call of arctic adventure, the six crew members of FMARS Expedition XII met in Denver over the weekend of June 13-14. Robert Zubrin conducted their pre-mission briefing, which also included discussions with an incredible staff of Mars Society volunteers who will provide critical mission support. Several crew members described this first face-to-face meeting as “inspiring.” As they delved into planning and operational aspects of the upcoming expedition and the many intricate details needed to make it a success, they also laid the groundwork for the most critical component: teamwork. Zubrin addressed questions and discussed details about Devon Island, mission safety, habitat operations, EVA procedures, and other mission constraints. The crew also shopped for critical supplies, shared their first meals together, and compared notes on their experiences thus far. All attendees left the Denver meeting looking forward to the challenges of conducting their research this July under strict Mars-simulated conditions. 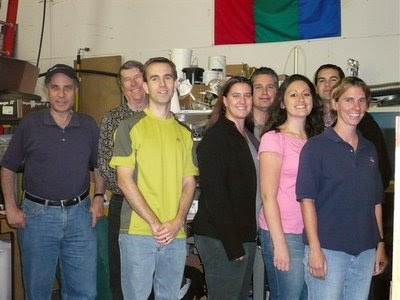 
The 2009 FMARS crew will bring many exciting research projects to Devon Island, including the Tandem Aerial and Ground Geological Survey (TAGGS), the Portable All-in-one Seismic Station Testing for Astronauts (PASSTA), Time-domain Electromagnetic Groundwater Survey (TEGS), Class IV Laser Therapy, DEtection of Water with COsmic Rays (DEWCOR), and a LIDAR investigation. Other activities include simulating the emergency response of a Mars base crew and field testing various GPS instruments, cameras, MIT Mission Planner software and the Omega Envoy prototype lunar rover. Media and outreach activities will include a series of video Q&A sessions with student groups in Florida and Georgia.

The FMARS website at www.fmars.org will soon contain a full description of these projects, along with a list of generous sponsors. 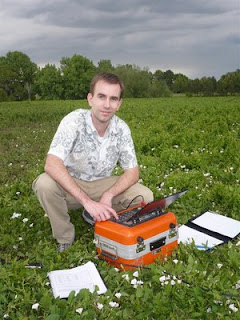 I'll write more on the research projects in future posts. Some of the acronyms shown above are just place holders, so if you have better ideas, please let me know.

One of the other things I did while in the Denver area was receive training for the geoelectrical portion of my FMARS research. I met with someone from the USGS who showed me the ropes on the Geonics PROTEM-TEM47 system, which is what I'll be using to search for groundwater while on Devon Island. Low frequency electromagnetic exploration methods such as this have been targeted for use on Mars, so this work will help answer how well astronauts could perform such surveys. The picture here shows me with the PROTEM receiver.

When I got back home to Hawaii, the Nanometrics Trillium Compact seismic system was waiting for me, so I've been learning how it works over the past week.
FMARS
Location: Lakewood, CO, USA