May 26, 2009
To prepare for my upcoming mission to "Mars", I have to make sure I'm prepared for living in remote arctic conditions. This includes knowing how to safely handle a gun in case we run into polar bears, how to drive an ATV, first aid, and being physically fit. In this post, I'll share some pictures from my training activities so far. First, let's set the mood with some music ...

This past weekend, film crews documented all six FMARS crewmembers doing training activities in Florida, Texas, and Hawaii. The idea was to capture the personalities of the crewmembers during our pre-expedition preparations. The footage will be used to produce a short promotional video to pitch the idea to Discovery network executives. Assuming they give the project a green light, a film crew will join us for the arctic mission and shoot video for a 2-hour special on the Discovery Science Channel. You can see some pictures of them interviewing me here. 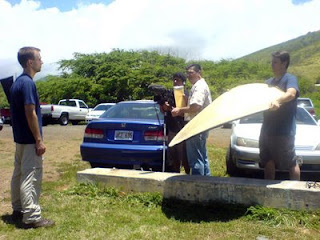 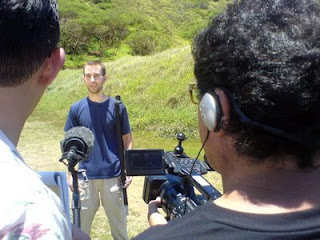 I spent Sunday morning at the Koko Head Shooting Complex for a one-on-one lesson from a NRA instructor and gun shop owner affiliated with the Hawaii Rifle Association. I practiced with a 12-gauge shotgun like the one we'll have up at FMARS. Skills I learned included how to safely handle the gun, load it without looking, firing properly, slinging (carrying) the gun, and different shooting positions. In the pictures here, you can see me firing the gun with the film crew watching. I hadn't shot a gun since my Boy Scout days 15-20 years ago, but it didn't take long for me to remember what to do. 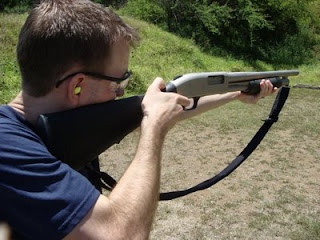 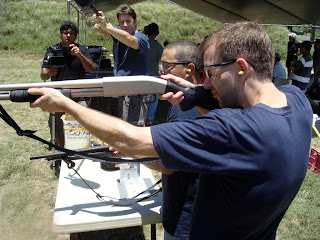 Sunday afternoon, we went to Kualoa Ranch for ATV practice. I'd been to the Ranch once before but was happy to return because it's such a scenic place. Many movies and TV shows like Jurassic Park and LOST were filmed there. After watching a short ATV safety video with a group of tourists, I was given a one-on-one lesson with of the ranch's ATV experts. We mostly touched upon ATV operations but also discussed some basic maintenance and troubleshooting, like fueling, flooding, or flipping the vehicle. Then, my personal guide led me on some trails for practice. The film crew followed on another ATV to record the live action. It was a blast. 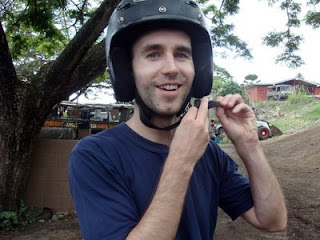 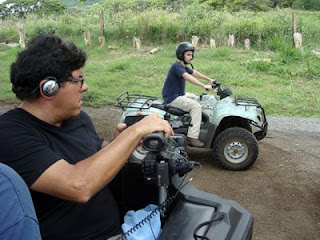 It's also important to be in good shape before any expedition of this nature. This includes making sure you have no dental problems or other lingering medical issues. I'm a pretty fit person anyway, but I have been ramping up my workouts a little to prepare for the mission. The picture here shows me doing push-ups with my 18-month-old son on my back. He likes to try standing up while I do them, which adds to the challenge for both of us. I've also been wearing him on my back in a baby carrier as I go on my evening walk with my wife in our neighborhood. The film crew got some footage of me hiking with him on my back in the woods of Kualoa Ranch.

I was planning on taking a wilderness first aid course in late June since it's been 10 years since I was last certified in that area. However, we've pushed the departure date for the trip earlier, so I won't be able to do it. One of our crewmembers is an EMT, and another is a sports medicine specialist, so I'm not too worried about becoming a first aid expert.

I've continued sending letters to potential funding sources in the hopes of reducing my out-of-pocket expenses for this expedition. So far, I haven't found any scholarship or grant money to help me. If you have a suggestion to help in this regard, please contact me. Thanks to everyone who has already chipped in to my fund to help pay for my portion of the expedition travel costs. If anyone else out there would like to make a donation, I really would appreciate it.

Kim Binsted said…
Good luck with all of your preparations. Even if you don't get a chance to do a wilderness first-aid course formally, try to review the materials. I'm sure you'll find it all comes back to you pretty quickly!
26 May, 2009 22:59

Alina said…
Wow, how exciting!!! This will be such a wonderful and exciting trip for you. Hey what about preparing for the cold weather??? Won't it be a big shock to go from the tropics to the tundra?
27 May, 2009 09:32

BrianShiro said…
"From tropics to tundra"... that has a nice ring to it. I might just have to use that phrase in a future post.

Alina, there's not much I can do to prepare for the cold weather. Luckily, I do have past experience spending two summers in Alaska, an expedition in Antarctica, and have worked in other cold places (not to mention living in Chicago for 4 years!). However, all of that was years ago, and I am used to the warm weather now. I don't anticipate any problems since when I went to Alaska last summer I adjusted just fine.

Another thing some of us have been doing to prepare is practice taking "Navy showers", which just means using as little water as possible only for getting wet and then rinsing off. Since it's a lot of work to bring our water to the Habitat from up to a mile away, we want to conserve water as much as possible. Some people have also been experimenting with recipes using only ingredients we're allowed to take on the mission so they get used to the food before the trip. I'll probably have future posts about water and food once I get up there.
27 May, 2009 09:41