June 24, 2009
In a few hours I'll leave sunny Hawaii and start my northward journey to Devon Island. First, I'll stop over with family in Oregon for a couple of days and then head up to Resolute Bay via Edmonton-Yellowknife. I'll be in Resolute for two days before the rest of the crew will join me. In that time, I'll check equipment and prepare for the mission, with particular emphases on testing our satellite internet dish and test-driving the ATVs we will take to FMARS. The map below illustrates my path and the easterly route my crew mates will take. Earlier in the mission planning, we had explored the option of chartering one plane to take all of the crew and gear from Denver to Resolute Bay, but that proved impractical, so we'll be flying on commercial airlines. 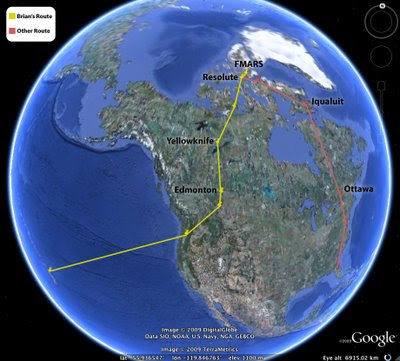 It is my sad duty to report that there will be no film crew at FMARS to get footage for a documentary. The production company really wanted to do it, but the executives who hold the purse strings at the big science channels did not commit. Although we won't have a film crew documenting our every move, we'll still take plenty of videos and will post them to the FMARS 2009 YouTube Channel.

So far, there is one video there. It's a "sizzle reel" made by the film production company to pitch the idea of a FMARS 2009 documentary to the networks. It features the crew preparing for the FMARS mission in Florida, Texas, and Hawaii during Memorial Day weekend in May 2009. I blogged about from the film crew's time with me in Hawaii a few weeks ago. I'd like to offer my sincere thanks to Tom Jennings Productions for making the video and promoting our expedition. The video is very good, especially considering how quickly the editors were able to put it together. There is one big error in the first minute, though. The first person to comment back with the correct answer wins the prize.

Finally, not to forget NASA's looming astronaut announcement, check out this Yahoo! News article on "NASA's new breed of astronaut." The article includes an interview with Duane Ross and is all about how the demands of long duration missions to the ISS might attract or even require a different demographic than the more stereotypical test pilot we usually associate with astronauts.

This is my sixth FMARS post and will be the final one before I get to Canada. It's not too late to chip in to my Mars fund!
FMARS
Location: Ewa Beach, HI, USA

Paul said…
Sorry to hear about that. But, we know y'all will do a great job of documenting it yourselves.