I'm going to Mars! (and I need your help)

April 28, 2009
While I was preparing a post on my experiences as a Mars Desert Research Station (MDRS) CapCom (Capsule Communicator) during the past four months, I received some wonderful (also Mars Society related) news that I decided to share instead. I'm going to Mars!

Well, not the real Mars (yet). I've been selected as a crewmember for this summer's month-long field expedition to the Flashline Mars Arctic Research Station (FMARS) on Devon Island in the Canadian arctic. This largest uninhabited island on Earth also happens to be a hotbed for Mars analog research, with both FMARS and the Haughton-Mars Project calling the island home. These stations are important laboratories simulating how to live and work on Mars. NASA has even tested prototype lunar rovers there. 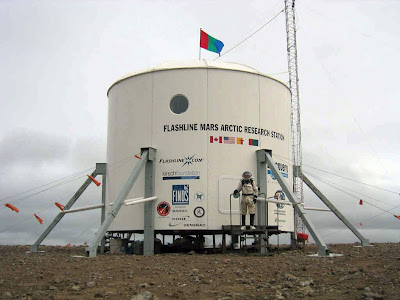 When I responded to the Mars Society's call for volunteers back in March, I thought I had a good chance of being selected but knew there would be some stiff competition. I am thrilled that The Mars Society has selected me to be a member of the FMARS crew. They haven't made the official announcement yet, but I do know that there will be six crewmembers (3 male, 3 female). I'll update this post with a link to the announcement when it's available. For now, you can read this article about it.

Update 18 May 2009: The Mars Society has announced our expedition!

Having already spent two Earth-related field seasons in Alaska and one in Antarctica, I will be glad to get back to the high latitudes for my first Mars analog field expedition. The map below shows where I've been before (red stars) and the location of FMARS on Devon Island (yellow star). Note that the latitude of FMARS (75°N) is approximately the same as McMurdo Station, Antarctica (78°S). 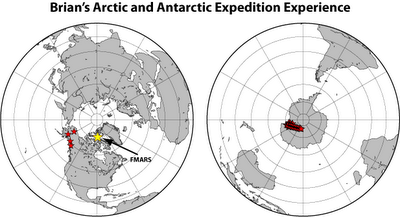 I need your help!

Although all expenses at the field site will be provided, I am responsible for transportation costs to and from the station. This could amount to as much as $5,000. I have created a ChipIn page where you can make a contribution to my travel fund. It uses PayPal to handle the transactions from any credit card or bank account. I've also included a handy widget below in this post and to the right side on my blog homepage that allows you to track the progress towards reaching my goal. Please consider donating any amount you can spare to help me get closer to my dream of becoming an astronaut!


Stay tuned to this blog for future posts outlining my plans with regard to my science activities and the trip itself. If anyone would like to collaborate on an experiment, please contact me. During the expedition itself, I plan to post regular updates letting everyone know what's happening on analog Mars.
FMARS Mars
Location: Ewa Beach, HI, USA

PillowNaut said…
This is just beyond awesome, good for you! I'd beg to go along if I wasn't such a wimp about cold weather -- looks exciting and I fully support all Mars simulations. Hear that rustling? That's the sound of me trying to find my checkbook, LOL...
08 May, 2009 02:41