Sailing on the HI-SEAS

Do you dream of being an astronaut and exploring Mars? Have you always wanted to visit Hawaiʻi, or do you live in Hawaiʻi but just want to get away from your regular life for a while? Do you have a burning desire to carry out research to advance our understanding of long duration space missions? If you answered yes to any of these questions, then I highly recommend you apply to be a crewmember on an upcoming HI-SEAS mission!

HI-SEAS stands for "Hawaiʻi Space Exploration Analog and Simulation." It's a NASA-funded study led by researchers from the University of Hawaiʻi at Mānoa. The goal of the program is to study aspects of crew cohesion and performance in the context of three simulated Mars surface missions of 4, 8, and 12 month durations in 2014-2016.  You can read all about it and learn about the application details on the HI-SEAS website or in the UH press release. The application deadline is November 1, 2013.

While the study pertains primarily to human social factors, it also presents an opportunity for many other add-on research projects ranging from microbiology to robotics and geology.  These activities provide realistic tasks that astronaut crews will likely carry out on a Mars mission. NASA wants to understand how teams of astronauts will perform on long-duration space exploration missions while doing relevant scientific and operational tasks. HI-SEAS will also provide recommended strategies for crew composition and how best to support crews while they are working in space.

I am fortunate to be one of the researchers involved with the HI-SEAS program in the areas of geology, crew selection, and mission support. The first HI-SEAS mission focused on food and lasted four months, ending in August 2013. During that mission, I coordinated an international group of mission support volunteers who helped facilitate the mission and presented on this work at the ICES 2013 Conference. I also helped prepare the crew for their mission the week before their mission began and was there to greet them when they emerged after four months of isolation. Below are some pictures of me at the HI-SEAS site last August. I'm going back there next week with the HI-SEAS science team to help plan the upcoming three missions. 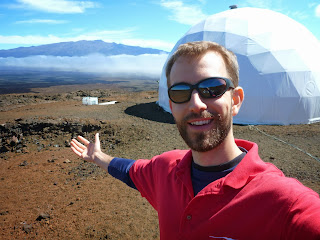 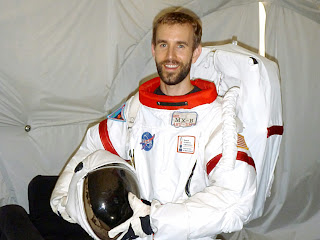 It is fitting that we are announcing this opportunity during World Space Week, whose theme this year is "Exploring Mars, Discovering Earth." I can think of no better way to accomplish both of those goals than to get involved with Mars analog research activities. In addition to HI-SEAS, there are other planned long duration Mars analog missions on the horizon. For example, the Mars Society will launch its Mars Arctic 365 mission next summer at the Flashline Mars Arctic Research Station on Devon Island, Canada - a place I know well. In China, the Research Group of Advanced Life Support Technology at Beihang University will simulate a Mars mission in a habitat sporting a high fidelity biogenerative life support system that provides closed loop recycling of consumables like air and water for the crewmembers living inside. This is indeed an exciting time for Mars analog mission research!

Norman Copeland. said…
The problem that worries me is the space suit ability for not being ripped when as an on site geologist you need samples using tools, I would say that the importance of digging a trench is of huge relevance, perhaps you could get through some of that surface soil? Ten foot, is a days work? Three days geology work...

It's real tough work, the suits would hyperventilate and an easy journey back to base would still be the most part of the day planning...