April 15, 2013
What would you do in your last week on Earth before embarking on an extended voyage to Mars? You would probably spend it taking care of last minute packing, studying up on your destination, eating good meals, and enjoying your remaining time with family and friends. That’s exactly what the crew of the 2013 HI-SEAS mission did during the past week, which I had privilege of sharing with them. Today they locked themselves away in a remote habitat on Mauna Loa to simulate a four-month stay on Mars.

As I’ve mentioned before, HI-SEAS stands for Hawaii Space Exploration Analog and Simulation. That mouthful just means that Hawaii offers an environment analogous to that found on Mars or the Moon. HI-SEAS is the brainchild of fellow Hawaii resident and FMARS+MDRS alumnus, Dr. Kim Binsted. On her 2007 FMARS mission in the Arctic, she became interested in questions surrounding the culinary and psychological aspects of locking a crew away for months at a time. Teaming up with Cornell University researcher Dr. Jean Hunter, they have carried out a food study with MDRS crews for the past five years. With the NASA-funded HI-SEAS mission, they are taking this to a new level of fidelity by rigorously testing two alternating food regimes of ready-to-eat packaged foods versus food the crew can cook from shelf-stable ingredients available in their habitat. You can learn all about the mission in this video:

It takes a team of people to get a project like this off the ground. From the construction crew who designed and built the habitat (which is a marvel of engineering) to the mission support volunteers who will be there every day to help the crew with their needs, at least 50 people are involved with the project in some fashion. In my role as Mission Support Manager, I coordinate the recruitment, scheduling, and organizing of the mission support team, who act as CAPCOMs on three shifts per day from their homes around the world. Having been a crewmember on similar analog missions to FMARS in 2009 and MDRS in 2010, I have a good idea what the crew is going through and am happy for the challenge of applying my past experience to this new mission.

So, let’s get back to my original question. Here is how the crew’s final week on “Earth” went:

Tuesday: In the morning, the crew had an initial spacesuit fitting, followed by a team briefing to identify the status of various mission elements. Later in the afternoon, we were treated to a behind-the-scenes tour of the 'Imiloa Astronomy Center, which provided historical context on the Native Hawaiian cosmological worldview, linking Polynesisan seafaring navigation with astronomy and planetary exploration.

Wednesday: Since the crew will be living in a remote mountainside habitat for 120 days, it is important they have a strong connection to the land and appreciation for the surrounding environment. We spent the day volunteering with the Mauna Kea Forest Restoration Project in the Ka'ohe Restoration Area planting 500 māmane tree seedlings to help restore the native habitat for the palila bird and other animals. We even went birdwatching and found three of the rare Hawaiian finch-billed honeycreepers enjoying life in a mature māmane tree. After a day of rewarding physical labor, we stopped by Kaumana Cave to explore the lava tube and the subterranean habitat it supports. These activities helped connect us to the local ecology, which is particularly critical when living off the land like pioneers on Mars will do someday. You can see a group shot of us on the MKFRP's Facebook page and some action shots below. 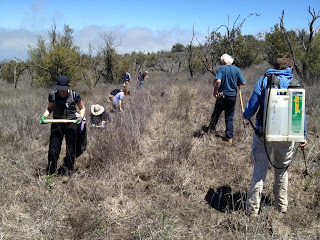 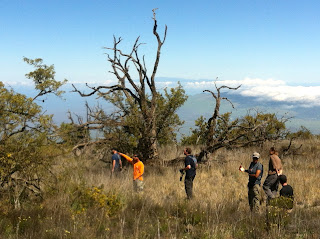 Thursday: Mauna Kea also hosts some of the world's most important astronomical observatories, but the construction of these facilities has been controversial in the past with the native Hawaiian community due to the mountain's sacred importance to their culture. From the beginning, the HI-SEAS project has worked with local cultural practitioners to engage the Hawaiian community with the HI-SEAS project. We visited a group of Kapuna (elders) to introduce ourselves and tell them about the project. They had some great questions, and afterward, they formed a large circle around us and gave us a blessing of success in the project and in our lives. After many hugs and kisses all around, we were about to leave when they invited us back inside for an impromptu hulu dance from an elderly woman and man. Their warm spirit and vibrancy was contagious as they danced for us and even pulled some of us forward to dance with them (including me!). We had originally planned to visit a local native Hawaiian school on Thursday as well, but the appointment didn't work out, so we spent the remainder of the day shopping and preparing further for the mission. One of the project's key supporters Henk Rogers then invited us, along with the entire habitat construction team, over to his ranch for a barbeque that evening. The photos below show us enjoying a hula dance and posing with Kimo Pihana after he blessed the crew near the Saddle Rd between Mauna Kea and Mauna Loa. 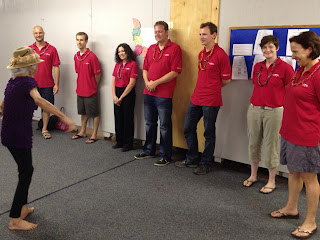 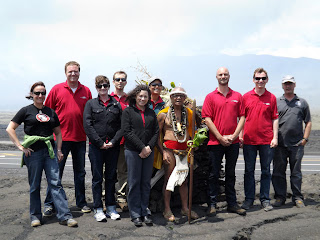 Friday: The HI-SEAS habitat building is a geodesic dome with all the comforts of home: an airlock, a kitchen, work/lab space, storage space, and six small quarters for each crewmember. It is outfitted with dozens of sensors controlled by an intelligent monitoring and control system. The structure is aware of CO2 levels, temperature, water, weather, etc. and adjusts vents accordingly. The crew can monitor and control this from a computer terminal that was modeled after and installed by the Hawai'i Preparatory Academy's Energy Lab. We spent the morning at HPA learning about the Energy Lab and the excellent educational opportunities it offers for the school's students. Then, we headed to Mauna Kea for lunch and a further cultural orientation from Koa Rice at Hale Pohaku before driving to the summit for a special tour of the Gemini Observatory facility. We concluded the day watching the sun set from one of the most majestic places on Earth before descending back to Hilo to celebrate Yuri's Night. 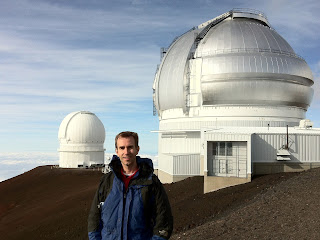 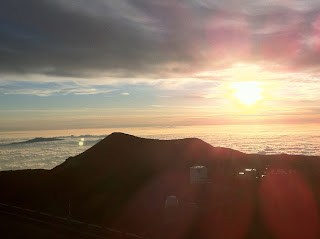 Saturday: After a telecon to organize the mission support volunteers, the HI-SEAS doctor stopped by for a house call to brief the crew on medical procedures and interview them individually on any medical concerns they may have. Then, I took my leave to fly back home, leaving the crew to sort out their final spacesuit fitting and preparations. In case you're curious, their mock spacesuits are modified hazmat suits that look like this. Maybe Mars is populated by little green men after all!

Sunday-Monday: The crew spent their last days on Earth resting, blogging, packing, and otherwise getting their affairs in order before being sequestered in a small habitat for four months. They "landed" on Mars in darkness this evening simulate arriving on the Martian surface without firsthand knowledge of the local terrain. 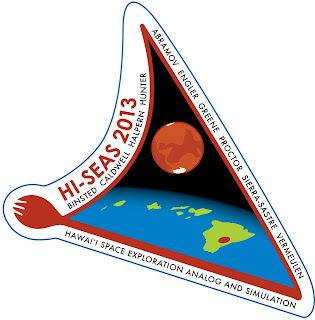 By spending the week with the crew during their orientation period prior to the mission, I was able to get to know them so that I can better anticipate their needs and serve them on the mission. Likewise, they got to know me as well. This helps to build the trust, respect, and friendship that help make these types of missions a success. The six crewmembers were chosen from about 700 applicants and represent some of the most competent, good-natured people I’ve ever had the pleasure of sharing company. Not only will they carry out the food study, carefully documenting and weighing their daily gastronic intake, they will also perform a number of other research projects in areas such as robotics, exercise, sleep patterns, biology, geology, and outreach. Like any good analog mission, crewmembers will embark on frequent EVA excursions in mock spacesuits to explore their surroundings and conduct field research activities.

Norman Copeland. said…
That is much better science from government funding, the standard is much better then it was at the earlier mock missions, I would like a better emphasis on range per EVA according obviously with ground area pressure on cabin duties. Remember Homo sapien is really an accomplished traveller with the use of fire. The attacks in open ground on body movement are always older complaints...

Medically, see you at the disco [in low earth orbit]!!!