October 05, 2012
A pair of interesting infographics came across my dashboard this week. The first one shows how Russia's cosmonaut selection criteria have changed from the early days of space flight to today. Not surprisingly, the health and anthropometric criteria seem to have relaxed, and the demographic has shifted from highly experienced fighter pilots to a wider range of professional backgrounds. How do you measure up? 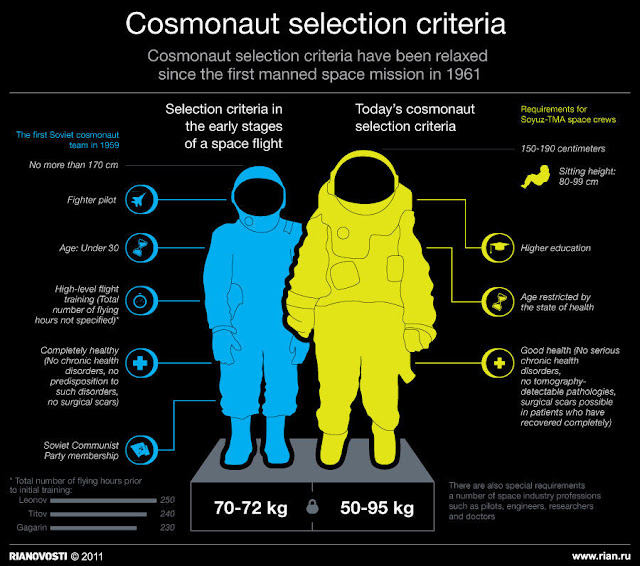 The second infographic details the selection criteria from anthropometrics to physical fitness and "moral-psychological qualities". I find it interesting that the maximum age they will consider is 33, presumably due to the six-year training period and long wait for orbital mission slots. Quite reasonably, they require a college degree plus five years work experience, but it's intriguing that one must be with a company for no less than three years. Part of the fitness test is a 5 km ski race, which makes this long-time cross-country skier happy. You can read the full set of Russia's current cosmonaut selection criteria here (in Russian). 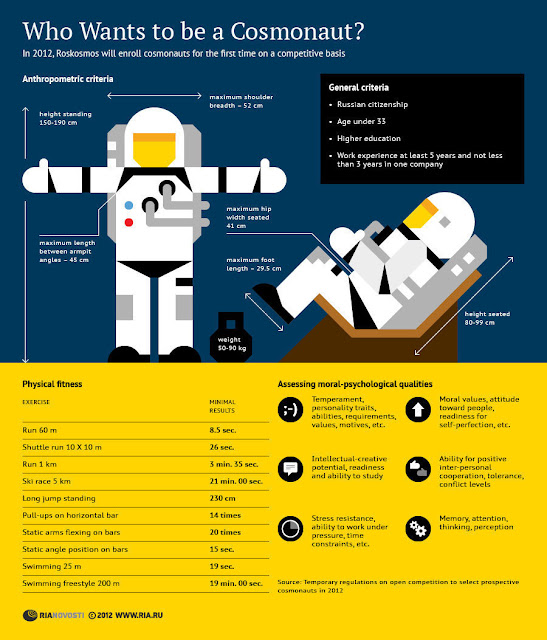 The Russian Federal Space Agency (Roscosmos) held its first open cosmonaut selection drive for its United Cosmonaut Corps from January 27 through March 15 - an ambitious timeframe that a representative of the Yuri Gagarin Cosmonaut Training Center recently recognized as "impractical". I must have been so engrossed with my pilot training earlier this year that I missed the press about Russia's 2012 cosmonaut selection. Maybe I wasn't the only one. Halfway through the nominal 2-month application period, only 43 people had applied for the job, so they extended the application period until April 30 to collect more applications. By then, 304 people had applied, including 43 women. I was not able to find an announcement of any final cosmonaut candidate selections, so I assume they are still evaluating applications to make the final selection. The Russian Space Agency currently has 36 active cosmonauts and 3 cosmonaut candidates remaining from its 2010 cosmonaut selection.

Of course, NASA is currently narrowing its pool of applicants as well. The word on the street is that some applicants are already being called to Houston for interviews starting in late October. Good luck, everyone!

In other news, as SpaceX prepares for its first ISS supply flight on Sunday, NASA announced today that it had signed an agreement with its international partners for the first year-long ISS mission, set to begin in spring 2015. The crew will consist of one American astronaut and one Russian cosmonaut. This may become the standard mode of operation as long duration missions beyond low Earth orbit become a higher priority for space agencies. To date, only four people - all Russian - have ever spent a year in orbit. Since the station will still require resupply, this means that more tourist flight opportunities could become available on Soyuz capsules.

Unknown said…
hello my name is aniket i am from india my qualification is 11th pass and my wish is became the most younger astronot in the world at age of 18 please send me in space
25 May, 2016 20:07