October 16, 2010
10-10-10 was a historic day for commercial human spaceflight. The VSS Enterprise (aka: "SpaceShipTwo") completed its first piloted free flight from its WhiteKnightTwo mothership ("Eve") over the Mojave Desert.  Here is an excerpt from the Virgin Galactic press release: 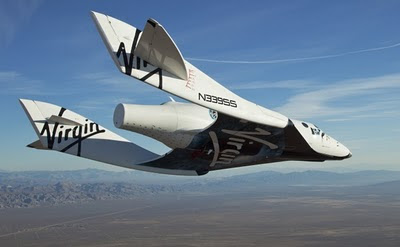 VSS Enterprise achieves manned free flight from over 45,000 ft (13,700 metres) and successfully glides to land at Mojave Air and Spaceport.

During its first flight the spaceship was piloted by Pete Siebold, assisted by Mike Alsbury as co-pilot. The two main goals of the flight were to carry out a clean release of the spaceship from its mothership and for the pilots to free fly and glide back and land at Mojave Air and Space Port in California.

If you like the photo of the VSS Enterprise shown here, you can view more images and video of the flight on Virgin Galactic's website. Cosmic Log, Wired, Popular Mechanics, and SPACE.com had great write-ups about the flight too. The spacecraft's lead designer Burt Rutan (whom I met in 2004), issued a statement praising the flight:

I offer my congratulations to all those on our commercial manned sub-orbital spaceship program for yesterday’s milestone first flight of SpaceShipTwo.   --Burt Rutan

According to Aviation Week, "the flight marks the start of the third phase in a seven-phase test program that is expected to culminate with the start of space tourism and science flights in 2012."

On Monday, October 18 the National Geographic Channel will air the first of a four-part series called "Virgin Galactic: Will It Fly?" featuring the latest flight of the VSS Enterprise and Virgin's goals to spur a viable space tourism industry. They released a video preview of the special program:

Attendees at next week's International Symposium for Personal and Commercial Spaceflight (ISPCS) meeting will be treated to a flyover by WhiteKnightTwo and the VSS Enterprise during the runway dedication ceremony at Spaceport America.

Looking forward, a recent CNN article discusses how the burgeoning space tourism industry is just around the corner with suborbital flights and eventually orbital space stations. My new venture, Astronauts4Hire is gearing up to serve these markets.