October 04, 2009
Today is October 4. On this date back in 1957, the world changed when the USSR launched Sputnik 1 into orbit. History was made again on October 4, 2004 when SpaceShipOne won the $10 million Ansari X PRIZE by being the first private spacecraft to reach suborbital space twice in the span of a week. I was there in St. Louis in 2004 as Burt Rutan received the award, and it made an indelible impression upon me. Below is a photo of me with Rutan as well as autographs I collected from him and other members of the Mojave Aerospace Ventures team who built the spacecraft. 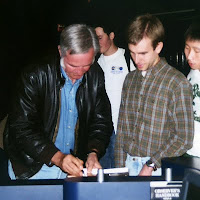 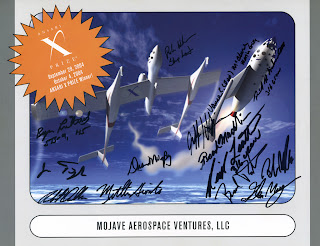 Let's now reflect upon the achievement as it was reported by one of my favorite journalists Jon Stewart:

Many have lauded this achievement as the beginning of the personal spaceflight revolution. No one has done more for advancing this cause than Peter Diamandis, an inspiring entrepreneur who founded the X PRIZE Foundation and many other space organizations like SEDS, Space Generation, ISU, and Space Adventures. I first met Dr. Diamandis at an Explorers Club meeting in St. Louis, and he encouraged me to attend ISU, which helped launch me on my path towards space.

Five years have passed since the historic SpaceShipOne flights. The ship is now hanging in the Smithsonian's Air and Space Museum next to the Spirit of St. Louis and Bell X-1. To commemorate the anniversary, the folks at the X PRIZE have released a number of recent blog posts reflecting upon the new private space frontier:


There are other really good stories on the 5-year anniversary on MSNBC and SPACE.com. The MSNBC story titled "What's next for X?" includes an interview with Peter Diamandis who says that December 7 is the expected first flight of SpaceShipTwo, the successor to SpaceShipOne. SPACE.com's story titled "5 Years After SpaceShipOne: Commercial Spaceflight Ready for 'Go'" includes an interview with Rick Tumlinson who offers the following predicted timeline for private spaceflight:


Maybe someday in the not too distant future other private space pilots will have views like Brian Binnie did on his SpaceShipOne flight: