A funny thing happened on my way to Mars. I went to North Dakota.

Nearly three years ago, I began my studies in the Space Studies Department at the University of North Dakota (UND). Since then, I've been working towards earning a MS degree in Space Studies by taking a steady stream of one or two courses at a time. The interdisciplinary distance education program has been both immensely rewarding and challenging. A lot has happened in my life along the way, including the birth of my son, my NASA astronaut application, the FMARS and MDRS expeditions to analog Mars, and most recently the founding of Astronauts4Hire. 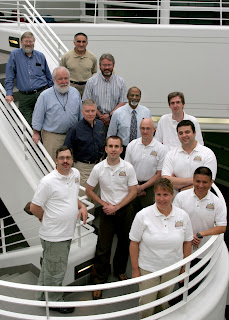 Last week, I participated in the UND Capstone experience.  This was my first time on the UND campus, and I was very impressed with the School of Aerospace facilities. It was a little surreal to finally meet my professors in person since I felt like I already knew them pretty well after watching their lecture videos and corresponding with them for all this time.  Capstone is a required two-semester course consisting of a collaborative team project on an interdisciplinary topic related to space studies.

The Capstone week was also the first time our eight-person capstone team had an opportunity to meet face-to-face. I can't stress enough how important that was to our project. We almost got more done in the last three days on campus than we had done in the previous three months. During the final hours leading up to our big presentation, we worked feverishly on integrating our report, which proposes a feasible, incremental strategy to land humans on Mars in 20 years.  If you're curious what we proposed, I suggest you see our Executive Summary report, which is on the MEP project website.

The topic of a human mission to Mars couldn't be timelier. Just a month before our project began in July 2009, NASA released its Mars Design Reference Architecture 5.0 plan for a human Mars exploration program. In October 2009, the Augustine Commission released its final report, which exposed troubling budget and schedule problems in NASA’s Constellation program. A month later, NASA and ESA made the bold announcement that they were merging their robotic Mars exploration programs beginning in 2016. The White House released its draft budget request in February 2010 that cancelled the Constellation program, encouraged commercial sector access to low-Earth orbit, and placed greater emphasis on technology development. Most recently, on April 15, 2010, President Obama gave a speech at the Kennedy Space Center where he set NASA’s sites on Mars with a tentative target to get humans there by the early 2030s.  An important goal in our Capstone effort was to outline a feasible Mars mission plan that could be carried out given current conditions. Thus, our team had to adapt to these changing political realities and adjust our approach as the project took shape. The project mission statement that we developed sums up our priorities:

To establish an integrated, sustainable exploration strategy for Mars exploration through a plan of synergistic human and robotic missions that maximizes scientific, political, and humanitarian benefit.

The Capstone week also includes tours of UND facilities. I was particularly excited to see the UND Space Suit Laboratory and Spacecraft Simulator Facility, which Pablo DeLeon manages. He's the same person who taught the Human Space Systems course last summer.  In the picture to the right, you can see me trying on the new NDX-2 planetary suit.  On the tour, I got to try out an Orion simulator for ISS capture and a SpaceShipOne simulator of a suborbital flight. Mike Melvill, the first commercial astronaut of the NewSpace era, recently visited the facility too and left his autograph on the simulator, which you can see in the photo below. Pablo's lab has some exciting plans this summer too. They will be building an inflatable lunar habitat and electric rover, which will later need field testing. Hmmm... I wonder who might want to join the field crew for those tests.

To graduate from the UND program, one must complete coursework, a comprehensive examination, the Capstone team project, and an individual research or thesis project. Students are required to present their individual research during the Capstone week.  My presentation summarizes the science I did at FMARS and MDRS, along the same lines as my LPSC poster from this past March.


In Situ Geophysical Exploration by Humans in Mars Analog Environments

I'm very grateful to the UND faculty for their support throughout the past three years. The UND Space Studies masters program compares favorably to ISU and now even accepts transfer credit from ISU. I plan to graduate later this year.

Unknown said…
I have nothing but positive things to say about the University of North Dakota, and the distance space studies program. The campus was beautiful with connecting tunnels when its cold. This really gave the campus a futuristic appeal. America needs to continue advancing, stimulating knowledge, and can only be done with a bright congressional support or taken out from under the congressional umbrella. as the world become easier to annihilate, the human species needs to have more than one refuge. Whether it's the moon or Mars, It really doesn't matter, but Mars has a greater potential to carry humans civilization.
17 May, 2010 19:40

Norman Copeland said…
It would be really exciting to be the first person to find a new element on another world/planetoid.