May 16, 2010
When the Space Shuttle first launched in 1981, I was only 3 years old. Although I was too young to remember the earliest Shuttle missions, the STS program served as an inspiration to me throughout my life. The astronauts floating in microgravity above the majestic Earth became my heros and affected the trajectory of my life. I always wanted to see a Shuttle launch firsthand, but I never had the opportunity. Until now.

Fellow MDRS crewmember Carla Haroz, who works for NASA, obtained a rare pass to see the STS-132 launch. She generously invited the entire MDRS-89 crew to join her at the Kennedy Space Center (KSC) to see the Shuttle leave Earth. The May 14 launch date couldn't have been more convenient for me since I was already on the continent anyway for the UND Capstone week. Not everyone from the 6-member MDRS crew could attend the launch, unfortunately. Even Carla couldn't be there since she had to be in Moscow to work on the Russian segment of ISS mission control. However, three MDRS crewmembers plus some of Carla's other friends were able to be at the launch. You can see the smiling group here.

Our car pass allowed up to seven people to travel in one vehicle to the West Causeway at the KSC. The site is about 6.5 miles from the Shuttle Launch Complex 39.  The Banana River expanse of water is all that separates the launch and viewing sites. Only NASA employees, plus the family and friends they bring with them, are allowed to this viewing area. Typically, there are a few thousand people at this viewing site, but since this is the third to last scheduled Shuttle launch, over 17,000 people were there.  In total, there were over 40,000 people on the KSC base viewing the STS-132 launch.  NASA expects three times this number for the final Shuttle flight in either late 2010 or early 2011. 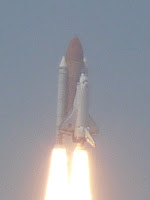 The launch happened on time at 2:20pm and conditions couldn't have been more perfect.  A series of loudspeakers provided commentary leading up to the main event. Hearing the muffled speakers count down 9 - 8 - 7 - 6 - 5 - 4 - 3 - 2 - 1 sent chills up my spine. As the STS engines ignited, and the stack rose into the sky, I managed to snap several shots with my camera but made sure to soak in the experience with my own eyes. Even from over six miles away, the plume was intensely bright. I could discern the orbiter, main fuel tank, and solid rocket boosters without any trouble. About 30 seconds after liftoff, the steady roar rippled through my chest, but it wasn't as strong as I had anticipated. A couple of minutes later the Shuttle rolled back as it draped out a trail of steam across the sky. This was the 32nd and likely last mission for the Atlantis orbiter, although there is a chance it could fly again if a rescue mission is needed.  There are only two more planned Shuttle flights.

For an even better set of photos on the launch, check out Joby Minor's website.  I met a close friend of his on the causeway before the launch, and he agreed to share the pictures with me. Some of the photos shown above are his.  Spaceflight Now also has some amazing pictures posted too.  For the best view, check out the Spacevidcast video:

After the launch, I spent the day at the KSC Visitors Center, where I wandered the exhibits, pretended to blast into space aboard the Shuttle Launch Experience, and experienced walking on the Moon in the 3D IMAX film Magnificant Desolation. All are highly recommended. I also met up with fellow A4Hs Ryan Kobrick and Amnon Govrin at KSC.  Later that night, I joined them at the first annual Space Tweep Society party at Fish Lips in Cocoa Beach.  I was happy to finally meet people I follow on Twitter face-to-face, including some big names like David Masten and Astronaut Leroy Chiao.  Below are pictures of Ryan, Amnon, and me on the left and Dr. Chiao, Amnon, and me on the right. 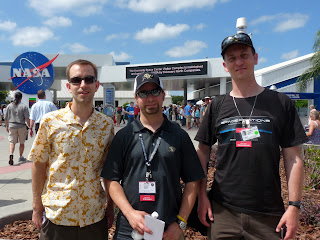 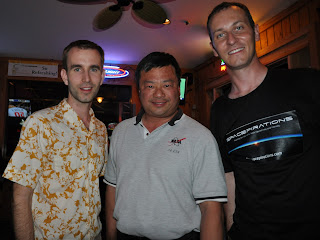 The next day, I toured KSC and was treated to close-up views of the VAB, Shuttle crawler vehicle, and launch pad. The extent of the steam exhaust damage was evident in the exfoliated bushes surrounding the pad.

Now that the Shuttle program is drawing to a close, we won't have many other chances to watch the world's favorite space truck thunder into orbit. I am extremely grateful that I finally had a chance to witness the spectacle with my own eyes.  What will the future bring for manned spaceflight? When will we see people launch for other worlds? After 132 Shuttle missions, anything is possible.

Wow! Check out these photos of Atlantis and the ISS transiting the Sun! It's mind-boggling to think that I saw Atlantis on the ground with my own eyes, and now it's up there amidst such a dramatic backdrop.