February 04, 2010
Today was a good day because we finally completed my seismic experiment. As I reported last time, we had problems on the first seismic EVA.  However, we learned from our mistakes and were able to successfully take 120 shots of data at 40 locations with 6 geophone spreads covering 109 meters (358 feet).  At just over 6 hours, it was our longest EVA of the mission.  Thanks to Luís, Kiri, and Darrel for their generous help with these two EVAs.  You can read Kiri's account of today's EVA on our crew blog (part 1 and part 2). 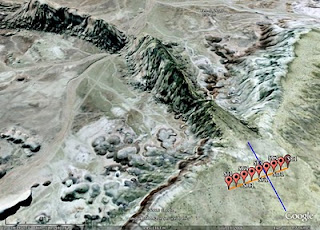 As I've described previously, I chose this site because ground penetrating radar (GPR) data suggest that the Kissing Camel Range (aka: "Dragon Head") is an inverted channel that continues beneath Radio Ridge a few kilometers southwest of MDRS.  The Google Earth screenshot shown to the right illustrates where we conducted the seismic survey.  The GPS waypoints spanning the survey are shown in red, and the blue line indicates the approximate position of the dipping reflector seen with GPR.  In the photo below, you can see me gazing out at the Kissing Camel Range from the vantage point atop Radio Ridge.

The main equipment for the project consisted of twelve vertical 4 Hz geophones mounted on a land streamer cable.  These were space 5 feet apart giving us a spread of 55 feet.  By towing the land streamer behind our rover we could easily move the geophone array.  I'm pictured below with the streamer on the left, and on the right I'm replacing a geophone that stopped working midway through the survey.  As you can see, much of the snow has melted compared to what it was like earlier in our mission. 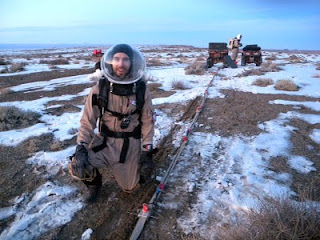 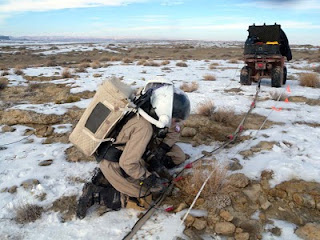 The geophones were connected to a Geometrics Geode seismograph controlled by a laptop computer.  We learned on EVA 17 that trying to see an ancient Toughbook screen in the sun through a spacesuit helmet is impossible, so on EVA 18 today we brought a modern laptop with a good screen and opted to operate it under the cover of a black opaque ATV cover.  On the left below, you can see me with the "geophysics-mobile" that I used to tow the geophones and hold the electronic equipment.  On the right, I'm shown using the laptop computer under the black cover.  It was kind of like the old-fashioned drapes photographers would use over their cameras. 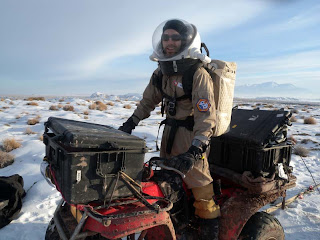 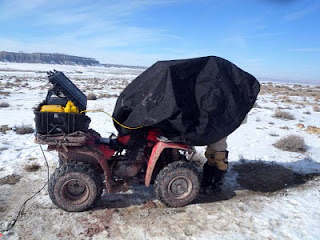 Here are a couple of other shots from the day.  We had to measure the line and put in survey flags where the shots (hammer strikes) needed to be.  I'm very grateful to Luís for doing most of the hammering.  He's shown below holding the hammer.  Click here to see him in action. 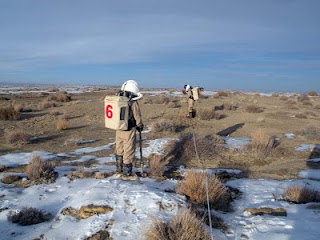 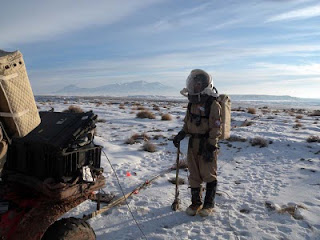 Like the seismic and electromagnetic work I did at FMARS last summer, this project taught me that the severe loss of dexterity and visibility astronauts must endure in their spacesuits dictates modifications to terrestrial geophysics equipment and techniques.  User interfaces to equipment must be as simple as possible; buttons must be large; and screens must be easy to read.  The more that can be automated the better because it's tough work doing everything by hand.  That's why specially-designed geophysical rovers like the PEGS are needed to effectively do shallow exploration geophysics on another world.

The next step is to pick the direct, refracted, and reflected arrivals on all of the seismic records to obtain the velocities and thicknesses of the layers beneath the survey area.  I'll then feed the information into software that will construct a 2D profile of the subsurface structure down to at least 10 meters.  Hopefully, the inverted channel feature reflector seen in the GPR data will be imaged more fully by this seismic analysis.  My goal is to have the preliminary analysis done in time for the upcoming LPSC conference (abstract).

Special thanks to Dennis Mills of Exploration Instruments for loaning the equipment, Carol Stoker (NASA) for her advice in choosing the site, and Jim Hasbrouck (Hasbrouck Geophysics) for his seismic survey advice.  Rob Stewart (U. of Houston), Chris Gifford (JHU-APL), and Drew Feustel (NASA) also provided valuable input for the experiment planning.