The big news yesterday was NASA's annoucement that LCROSS definitely exhumed water in its October 9 impact into the Moon. That's good news because it confirms the presence of water on our closest neighbor. This means we have a ready source of hydrogen, oxygen, and water for rocket fuel and life support. It makes the prospect of establishing a permanent human base on the Moon much more feasible. Almost every space blog seems to have written something about this landmark discovery, so I won't repeat it here (The New York Times had a nice article.) Congratulations to the LCROSS team!

One day in the hopefully not-too-distant future we'll have a permanent research base on the Moon, but it'll likely be operated much like McMurdo Station, Antarctica is here on Earth. It'll require frequent resupply of life's necessities, and in the event of emergencies, people can leave. The Moon will probably never support a large human civilization, but Mars could be another story if we're willing to make a few changes there.

This week is the National Geographic Channel's (NGC) second annual Expedition Week. It features some interesting programs like Drain the Ocean, Giant Crystal Cave, Easter Island Underworld, Bizarre Dinosaurs, and Egyptian Secrets of the Afterlife. Any series with "Expedition" in the title grabs my attention, but I was particularly drawn to one of the series' other offerings: Mars: Making the New Earth, which will air on Thursday, November 19. That happens to also be my son's second birthday, so now I have two reasons to look forward to the date! The show is all about how and why humans could transform Mars into a habitable planet. You can watch a promotional clip of the program here:


Other video segments featuring interviews with Chris McKay and Robert Zubrin on how to terraform Mars and the ethics of whether we should do it at all are available on the NGC website.  McKay's passion for Mars exploration led him to found a series of conferences on "The Case for Mars" that inspired Zubrin to write his book by the same title. Zubrin then went on to found The Mars Society (with McKay's support) and establish the FMARS and MDRS simulated Mars bases. I spent a month at FMARS this past July and will lead a crew on a 2-week mission to MDRS in Utah this coming January. The NGC video clips feature some astronauts in simulated space suits traversing terrain near the MDRS. Below are two images depicting a terraformed Mars from the NGC program: 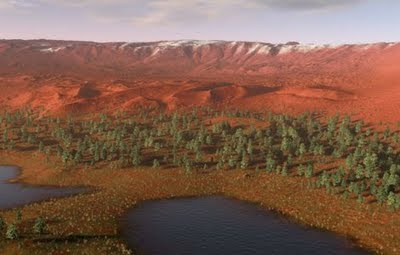 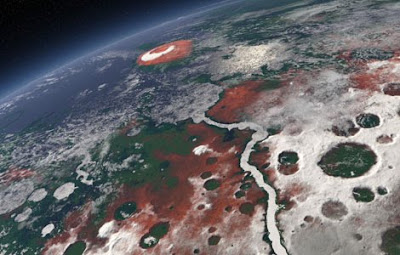 The subject of terraforming Mars first grabbed my attention about eight years ago when I read the Kim Stanley Robinson Mars series: Red Mars, Green Mars, Blue Mars, The Martians. The award-winning science fiction novels are all about the large-scale human colonization of Mars starting in 2026 and spanning 200 years. During that time, the colonists are able to transform the planet from a cold, dry, barren landscape into a relatively warm, wet, and green one. They develop many engineering and medical technology breakthroughs that allow them to live in the harsh environment, and this ultimately changes humanity. 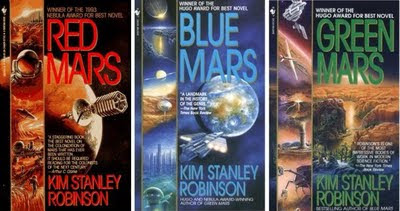 In Robinson's books, the people splinter off into two main groups: "the Reds" and "the Greens." Reds want to preserve Mars in its natural state so as not to disturb the geological and potentially biological secrets locked away in the martian past. Greens want to exploit the resources of Mars to terraform it into a place where human society can flourish. After a series of conflicts, the Greens won, and Mars was changed forever. Zubrin is definitely a Green and is one of the strongest advocates of colonizing Mars. He and The Mars Society have detailed how we could make this happen. McKay is not quite a pure Red in that he'll gladly colonize Mars if we can prove that native life does not exist there. However, if there is any life there, McKay argues we should leave it alone to evolve on its own.

It's a tough ethical question. Should humans conquer another planet and colonize Mars? After all, the history of our species is one of expansion into essentially every place on Earth. It is logical that we will continue this trend outward into the cosmos. I just hope we do it in a responsible way with rules like Star Trek's Prime Directive rather than James Carmeron's vision in his new Avatar movie. The tremendous response to Google's 2008 April Fool's Day joke illustrated just how widespread interest in Mars colonization is. It's mostly a question of political will and money.

Kiri said…
I'm interested in the special as well -- but cautiously skeptical about any claims of terraforming Mars in 100 years (even if we had the will and the resources to attempt it). And as a fan of KSR's Mars books, I'm much closer to the Red end of the spectrum. How about you?
18 November, 2009 20:28

BrianShiro said…
I think I'm red of center on the red-green spectrum. The scientist and environmentalist in me want to preserve Mars for study by posterity, but my space explorer side would love to turn it into a habitable planet. I think my views are close to Chris McKay's: If we can prove Mars has no life, terraforming is worth considering. I suspect any large scale effort would take hundreds, if not thousands, of years, but I'm not up on the research in this area.
21 November, 2009 00:25