July 11, 2009
Today was the first annual Haughton Crater Run. At least, that's what I'm calling it. Christy Garvin and I were the only two participants in the exercise event, but maybe our example can inspire future analog Mars explorers to follow in our footsteps. We ran 4.9 miles in about an hour (plenty of stops for pictures or to walk over the really rocky areas). The map below shows the path we took, with an inset illustrating the elevation profile of the run (click for larger). I especially like the elevation inset because it shows a nice profile of the crater with a drop of about 300 ft from rim to floor. 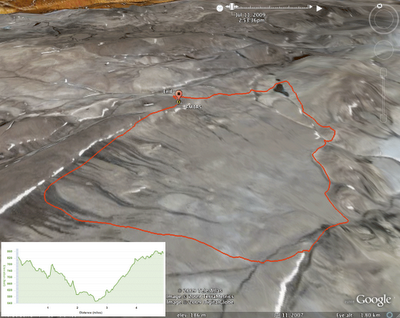 We set out from the FMARS Hab with layered clothing to accommodate changing weather conditions, a GPS, a radio, a map, a camera, and a loaded shotgun in case we ran into any unfriendly polar bears. It was a sunny day with mostly clear skies, but up on the Haynes Ridge where FMARS sits it was quite windy and cold. Once we got down onto the crater floor near Lake Cornell, we were sheltered from the harsh wind and could shed some layers. This photo shows me at the lake with FMARS in the background. The FMARS-XI crew in 2007 had to use this as their main water source after the Lowell Canal dried up.

After we climbed a steep hill on the other side of the lake, we had sweeping views of the crater. Christy took a 360 degree movie, and I made this panoramic photo:

We followed an ATV trail along a stream for a while and then veered off it once it became too muddy. We crossed the crater floor to head back towards FMARS and stopped to take this group picture and an action shot of me running:

When we got back to the Haynes Ridge, we were greeted by high winds, dropping temperature, and terrain so rocky, we had to walk most of the time. We arrived back at FMARS about an hour after we had left feeling refreshed and glad for the opportunity to exercise outdoors. Once we start our simulated Mars mission tomorrow we won't be allowed outside without a protective space suit. Just like real astronauts, we still have to exercise, though. The FMARS Hab includes an indoor stationary bike, treadmill, balance balls, resistance bands, and some dumb bells.

I had extended an invitation to the HMP folks to run with us too, but they unfortunately declined. The recreational activity would have been a nice way for the FMARS and HMP people to interact on a social level without interfering with the separate research activities of the two groups. Maybe some of them will see this post and opt to run with us in the second annual Haughton Crater Run next year. :)

More photos are available on our Picasa site. I've run in a lot of interesting places, including Scott's Hut Race in Antarctica. Now, I can say I've run on Mars too!
FMARS
Location: North America