The End of Kaguya and Beginning of LRO

June 19, 2009
The Japanese lunar orbiter with the impressive HDTV camera has met its end as mission controllers guided it to the surface for a planned impact in a shaded region near Gill Crater at approximately 89°S, 266°E (In a June 11 press release, JAXA showed the impact site location.). As it approached the moon, Kaguya took a series of still images, which are available in the June 19 JAXA press release or in the animated sequence I created from them below:

The LTVT wiki has collected a lot of information on the impact itself. Jeremy Baily and Steve Lee observed the impact from the Anglo-Australian 3.9m Telescope at Siding Spring, New South Wales, Australia. You can learn more on their webpage, or take a look at their image showing the impact in a sequence of four frames: 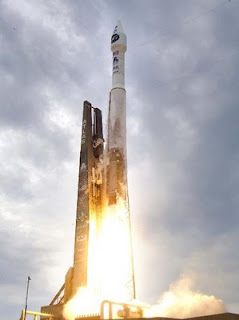 More stunning lunar images from Kaguya are available in the mission's image archive.

In other lunar news, the Lunar Reconnassiance Orbitor (LRO) had a successful launch yesterday from Cape Canaveral aboard an Atlas V. The LRO objectives are to finding safe landing sites, locate potential resources, characterize the radiation environment, and demonstrate new technology. It is the first in a series of new lunar missions NASA has planned to pave the way for its return to the Moon.

On the astronaut front, readers may be interested in a recent The Launch Pad post on one of ESA's new astronauts Samantha Cristoforetti.

I've been keeping very busy preparing for my trip to FMARS. I leave in five days. Last weekend, the crew met each other for the first time in Denver for a marathon mission planning weekend. Once the press release from that comes out, you can expect another post here. If anyone wants to help me pay for the expedition to an analog Mars, please surf on over to my chipin page.