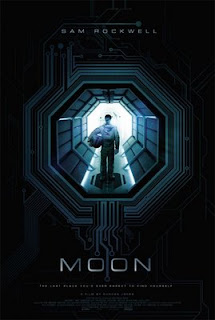 Blog reader Ben tipped me off to a really interesting movie called Moon. It stars Sam Rockwell as an astronaut spending a three year solo mission on the Moon mining Helium-3, which could be an important source of fuel for clean nuclear fusion. His only companion at the lonely outpost is his robot, voiced by Kevin Spacey. The suspense heats up in this scifi thriller as, just before he's set to go home, Rockwell realizes he's not alone. You can watch a clip below. There are more clips and images here and here.

If Rockwell's performance in Confessions of a Dangerous Mind is any indication, this should be a real treat. Moon is an independent film that premiered at the 2009 Sundance Film Festival. You can read a brief review here or excerpts from other reviews on the film's wikipedia page.

Anyone in the Houston area on Monday, March 16 might consider attending a free pre-release screening of the film at JSC as part of the Space Center Lecture Series. The event starts at 7:00pm with doorprizes before the movie, and afterwards the film's director Duncan Jones (David Bowie's son) will host a Q&A session. Although the event is free and open to the public, the organizers do ask that you RSVP since space is limited. (You can also watch full videos of previous lectures in the series, including Harrison Schmitt and Tom Jones, here.)

There is a new high-definition 2-minute trailer for this movie. Check it out: