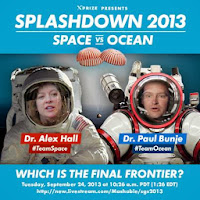 The Mashable Social Good Summit (#2030NOW) provided a forum for discussion of big ideas to make the world a better place. I took special interest in their "Ocean vs. Space: Which Is the True Final Frontier?" event, which pitted Alex Hall of the Google Lunar XPRIZE (#TeamSpace) against her colleague Dr. Paul Bunji of the Wendy Schmidt Ocean Health XPRIZE (#TeamOcean).

What ensued was an engaging conversation about the relative merits of exploring our planet's ocean and space beyond. It wasn't as confrontational as the title made it out to be, as both Hall and Bunji held great affection for the other's area of exploration. Mashable's summary of the 15-minute debate covers the high points, but I encourage you to watch it for yourself:

So what do you think is the Final Frontier, the ocean or space?

As someone who works for NOAA and collaborates routinely with NASA, I have a foot in both worlds. My perspective is that they are synergistic. There is more than enough exploration capital to spread around, so choosing between the two is a false dichotomy. Plus, the technologies and strategies developed in one setting often translate well to the other. We can learn to live in space by tackling the challenge of living underwater, for example. Of course, this presumes that manned undersea exploration isn't dead, as evidenced by the recent re-opening of the re-opening of the Aquarius Reef Base.  I think the potential benefits of exploring the ocean are great enough that there will always be a driver to do so, no matter how far we push the frontier beyond Earth.

Besides the pursuit for knowledge and protection of our planet's fragile ecosystem, perhaps the most direct benefits of exploration - regardless of what form it may take - are the technological spinoffs that only unique problems posed by exploration can trigger. That often translates into jobs and other tangible benefits like energy security. After all, learning how to thrive in a closed loop life support system on either a spacecraft or undersea base can teach us how to better learn to live more within our means back on Terra Firma.

The Mashable debate also touched upon the apparent cultural preference for space exploration. I admit that the allure of space is hard to ignore.  Perhaps that has been emblazoned on our cultural conscience by the huge investment in and returns from the Apollo program. We haven't had such a concerted effort placed into ocean exploration, despite some great initiatives such as NOAA's Okeanos Explorer, DEEPSEA CHALLENGE, Virgin Oceanic, and SeaQuest DSV.  And on the subject of television, part of the genius of Gene Roddenberry in establishing Star Trek was that he based it on a Naval model. He saw space exploration as a natural evolution from seagoing activities on Earth. I have to agree.

Unknown said…
Years and years ago, OMNI magazine, in one of their humor articles, proposed merging NOAA and NASA to form the National Aerospace and UnderSea Exploration Agency (NAUSEA). Comedic angle aside, that article strongly imprinted upon me the similarities between the two frontiers.
29 October, 2013 17:33

BrianShiro said…
Yes, there is indeed a lot of overlap between the two agencies. Five years ago, there was a serious proposal made to merge parts of NASA with NOAA and the USGS. I blogged about it here: http://www.astronautforhire.com/2008/07/noaa-usgs-essa.html
13 November, 2013 11:53