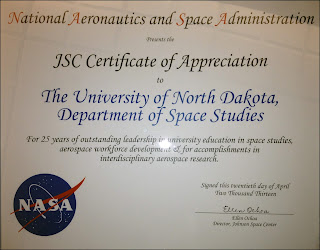 NASA has awarded the University of North Dakota (UND) Department of Space Studies with the JSC Certificate of Appreciation in recognition for 25 years of outstanding leadership in university education in space studies, aerospace workforce development, and for accomplishments in interdisciplinary aerospace research. It is the highest award that the Johnson Space Center (JSC) bestows upon non-individual groups. As a UND Space Studies graduate myself, I want to personally congratulate everyone involved with the program on their well-earned recognition.

The 23 July 2013 awards ceremony at JSC was well-attended by UND alumni and students in the Houston area. Dr. Paul Lindseth, Associate Dean of the UND School of Aerospace Studies, Dr. Santhosh Seelan, Chair of the Department Space Studies, and Mr. Josh Christianson, Director of Alumni Affairs, accepted the award on behalf of all current and former UND Space Studies faculty, staff, and students. You can see them pictured below holding the award certificate, signed by JSC Director Dr. Ellen Ochoa, along with a North Dakota flag that was flown on 200 orbits aboard the Space Shuttle Atlantis during the final Space Shuttle Mission STS-135 in July 2011. They dedicated the award to John D. Odegard, who had the vision to start and nurture the Space Studies program at UND with the help of Dr. David Webb under the guidance of Dr. Buzz Aldrin. 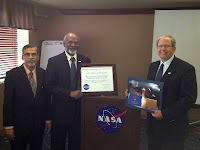 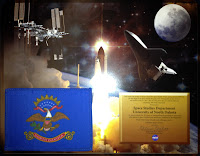 Recognizing the accomplishment, UND alumnus astronaut Dr. Karen Nyberg tweeted the following from her perch on the ISS:

On Friday, 2 August 2013, Nyberg will deliver the UND Summer Commencement address from the ISS, where she is currently serving a six-month mission as a crewmember on Expedition 36. The ceremony begins at 3:00 pm CDT and will be broadcast live on the internet.

The UND Department of Space Studies has launched hundreds of graduates onto successful aerospace careers. To learn more about the program's MS and (new) PhD academic options and its facilities like the exciting NASA-funded Human Spaceflight Lab and UND Obsevatory, click over to www.space.edu.