June 09, 2011
Last night NBC Nightly News featured a nice segment on the new space race. Unlike the competition between the US and USSR that fueled the first space race, the modern one involves private companies like SpaceX, Boeing, Orbital Sciences, Sierra Nevada, Blue Origin, Virgin Galactic, and XCOR competing with one another to produce the safest, most cost effective vehicles to transport astronauts, cargo, and tourists to orbital and suborbital space.  Of course, the commercial spaceflight era really began in 2004 when SpaceShipOne won the Ansari X PRIZE, so this video isn't news to anyone who follows the space industry. However, it's significant because it reached a large mainstream audience of viewers in the general public.


Visit msnbc.com for breaking news, world news, and news about the economy 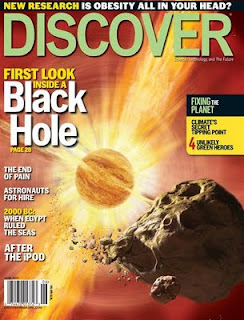 As the 30-year Space Shuttle era draws to a close next month, NASA will have to rely on the Russians for a ride during the next few years. That's why NASA's 2009 ASCANs were subject to more restrictive anthropomorphic requirements than their Shuttle-faring predecessors.  Finalists had to be between 62-75 inches tall in order to fit properly in the Soyuz TMA spacecraft.  Taller or shorter applicants were disqualified.  However, once other vehicles like NASA's Multi-Person Crew Vehicle (MPCV), SpaceX's Dragon, and Virgin Galactic's SpaceShipTwo are proven safe for human transport, we could see a great widening of selection requirements so that almost anyone with the right stuff will be able to fly into space.

That's why we may see the emergence of "After the Shuttle: Astronauts for Hire", which just happens to be the title of a cover story Discover Magazine article featuring an interview with me and former astronaut Ken Bowersox.  The 2-page article focuses on how what it means to be an astronaut is changing in the post-Shuttle era. Get your copy of the June issue on newsstands now!

Norman Copeland said…
Hello Brian, interesting times!!!
Of recent I thought about the frequent photographs that science journals have published about the possible worm hole at the edge of our solar system, the graviton research at night compared to day could teach us a lot about modern astro photography. If the light radiation is different would the silver used to develope the pictures actully differ to the light arc development of our planetary surface light photography?

Could be a good personal hobby project to test at lower water depths?


I use red blood cells, but, I haven't been at multiple milage depths with a simple torch and some 3d cinema glasses, so, I'm just guessing that the research could just as easily be done on board SOFIA or a private rented aircraft.