A Half Century of Humans in Space

April 12, 2011
Today the world celebrates a very special anniversary. On this day in 1961, Yuri Gagarin became the first person to visit space, ushering in a new era for humanity as a spacefaring species.  An instant worldwide hero, Gagarin has served as an inspirational figure to astronauts and the populace else ever since.  Since 1962, the Soviet Union (now Russia) has observed April 12 as Cosmonautics Day, and for the past decade the world has celebrated every April 12 as Yuri's Night.  Now in 2011, the United Nations General Assembly adopted a resolution officially proclaiming April 12 as the International Day of Human Space Flight. 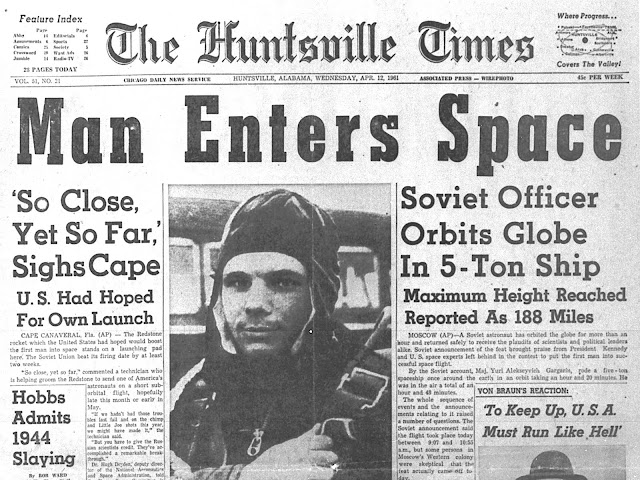 Upon returning to Earth, Gagarin said, "When I orbited the Earth, I saw how beautiful our planet is. We must protect and preserve this beauty and not destroy it." This is a common theme expressed by astronauts - that the Earth is fragile and up to all of us to protect.  I think that is one of the most important legacies Gagarin and the space program have left us. From the vantage point of space, we can see the Earth as a whole system.  Petty political problems don't matter.  Every action has an effect, so we must all strive to do what we can to maintain the proper natural balance in our planet's ecosystem.

But what did Gagarin see on his 108-minute flight some 327 kilometers (203 miles) above the Earth's surface? That's a question the makers of the film First Orbit wanted to answer.  Astronaut Paolo Nespoli and documentary filmmaker Christopher Riley teamed up to film, as closely as possible, the same vistas Gagarin would have seen from his Vostok 1 spacecraft from the new ISS cupola window. The full-length documentary video matches the duration of the first human flight in space. Pop some corn and invite your friends to watch with you. This is good stuff.

A behind-the-scenes "making of First Orbit" video and National Geographic interview with filmmaker Christopher Riley are both highly recommended too.  A really good gallery of photos from Gagarin's Vostok I flight is available at SPACE.com. Other good galleries are at NASA History and National Geographic.  Russianspaceweb provides a wealth of historical information on the flight too.

Although I think most of us look upon this anniversary as something to celebrate, it is bittersweet.  After all, NASA's Space Shuttle program, which shares its anniversary with Yuri's famous flight, is closing up shop this year.  The surviving shuttles will be mothballed and sent to museums.  What will come next?  More importantly, what is driving us to explore space now?  Is it even cost effective to send humans to space, or should we just send unmanned spacecraft at a fraction of the price?  Two great opinion pieces on these subjects and more are a New York Times article by Michael Benson and Space Review article by Jeff Foust.

X PRIZE Foundation Chairman and CEO Peter Diamandis thinks the answer lies in the private sector.  As he states in his Yuri's Night toast below, Diamandis believes that investments by wealthy individuals in exponential technologies like nanotechnology, artificial intelligence, clean energy, and even spaceflight will fuel an ever-increasing growth in exploration that "cannot be stopped by any one government or any one failure."

I first met Dr. Diamandis in St. Louis in 2004 following the successful completion the world's first two commercial spaceflights that won the Ansari X PRIZE.  We talked for a while about spaceflight and the possibilities for the future.  He inspired me to complete programs in Space Studies at the International Space University (which he co-founded) and the University of North Dakota.

I started this blog three and a half years ago to chronicle my progress as a NASA astronaut applicant.  Then, I met astronaut Yvonne Cagle, who got me interested in the scientific opportunities on upcoming commercial suborbital vehicles.  Along with people I met through this blog, as well as my FMARS and MDRS missions, I co-founded Astronauts4Hire last year to create a new type of astronaut who is available on a contract basis for space missions.  We timed the birth of Astronauts4Hire to occur on April 12 along with the Vostok 1 and Space Shuttle anniversary milestones.  I like to think of these three events as signifying the start of three eras of human spaceflight: 1961-1980 was the pioneering era begun by Yuri Gagarin and epitomized by Apollo; 1981-2010 was the Space Shuttle era where operations in low-earth orbit became somewhat more routine; and 2011-onward is the commercial spaceflight era that will carry us forward.

Atlanta Roofing said…
Yuri Gagarin had no control over his spacecraft. Vostok's reentry was controlled by a computer program sending radio commands to the space capsule. Although the controls were locked, a key had been placed in a sealed envelope in case an emergency situation made it necessary for Gagarin to take control. As was planned, Cosmonaut Gagarin ejected after reentry into Earth's atmosphere and landed by parachute.
12 April, 2011 23:11

Anonymous said…
Hi. Great post, and great to acknowledge Gagarin on that day… He is a true hero. “I see Earth. It is so beautiful”, reportedly said Gagarin. By the way, talking about Earthy matters like successful trading, here is a great site on Turtle Trading Systems. Check it out, and learn more. Best of luck trading.
Turtle Trading
13 April, 2011 13:28

Justin L. Brown said…
In middle of the road and transitional stages in history the principle assignment for major political gatherings is focus and union of force so as to make conditions for further attack on the general public. Gagarin whose orbiter was Vostok I
12 February, 2016 23:00