April 24, 2011
How many astronauts does NASA need? That's a question I posed on this website four months ago when NASA commissioned the Committee on Human Spaceflight Crew Operations to review the space agency's astronaut needs. The committee's final report isn't due until August of this year, but a related New York Times article published this weekend caught my eye. The article starts off with the provocative query: 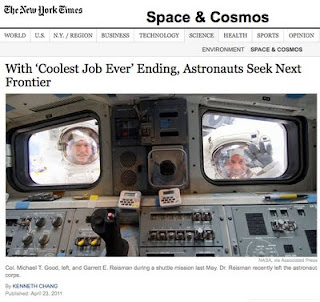 "What happens when you have the right stuff at the wrong time?

It goes on to cite examples of how NASA astronauts are leaving the agency to pursue other career options in the wake of the Space Shuttle and Constellation program cancellations. According to the article, 20 astronauts left NASA in 2010, leaving only 61 currently on the payroll - a far cry from the peak of 150 astronauts in 2000. After all, companies like Virgin Galactic and SpaceX are currently hiring astronauts.  Bigelow Aerospace made headlines back in 2007 and 2010 when it advertised it was looking to hire a professional astronaut too.

"NASA will still be hiring astronauts... In the next year or two, as more people leave or retire, the agency will recruit a new class of 6 to 12 astronauts... If NASA decides to reduce tours of duty at the space station from six months to four, that would mean a need for even more astronauts."

This is the first time I've seen a public report giving any reputable details on NASA's next astronaut selection. I find it heartening that NASA is not planning on a dramatic downsizing of its astronaut corps.  This points to a great deal of trust in both Russia and the burgeoning Commercial Crew & Cargo program, which just last week awarded four Space Act Agreements as part of its Commercial Crew Development (CCDev2) initiative. Note: When NASA talks about "Commercial Crew", it is referring to the vehicles and launch systems, not the crewmembers themselves. As far as I know, NASA has no plans to privatize its astronaut corps.

So to all of you astronaut hopefuls out there, you have a year or two to load up your resume in anticipation of the next NASA astronaut selection!

Laksen Sirimanne said…
This is good news Brian. I agree that NASA will need some new crew for ISS operations and knowledge will absolutely be needed to be handed down to another generation. The older generation of astronauts have great places to go (SpaceX, Boeing, Bigelow) where they can take their knowledge to give these companies a head start. The next ten years will open space for everyone else. L.
24 April, 2011 11:58

PillowNaut said…
It is amazing to think we will witness the era where an increasing number of entities will have the need for people who can train to withstand the rigors of travel through micro-gravity! The first one I heard about by name was Garrett Reisman, leaving NASA to tgo to SpaceX and that really blew my mind. But it was bound to happen!!
24 April, 2011 13:31

Anonymous said…
Latest rumor on the timeline for the next NASA selection (heard from friends at JSC)...

a) Similar timeline to the 2008-9 selection: announcement of opportunity in spring 2012, with applications due by July 2012, and the class selected and reporting to JSC by summer 2013