November 14, 2010
With Earth's ever-expanding human population putting pressure on its limited resources, it's only a matter of time before we get serious about seeking out new real estate to colonize. I think it's inevitable that one day we'll spread out across the solar system and indeed the galaxy, but in the meantime, the 70% of the planet covered by water is prime for exploration, exploitation, and inhabitation.

I'm proud to announce that I have been selected as a crewmember to the Atlantica I Expedition planned for July 2013.  Spending five days beneath the sea, I'll earn my aquanaut credentials along with a distinguished crew of highly accomplished individuals.  You can read my Atlantica bio here. 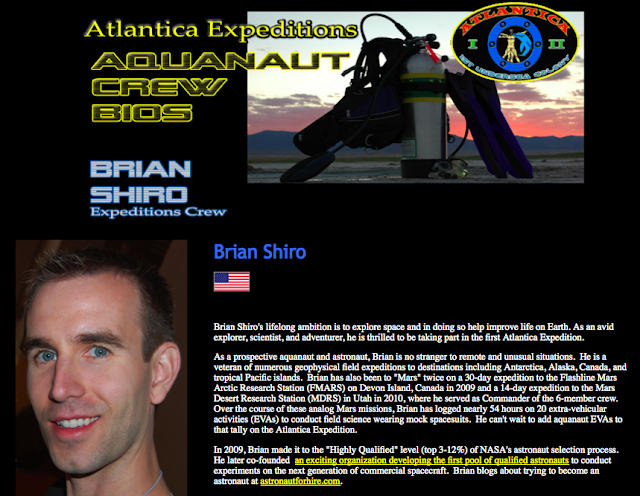 One man, Dennis Chamberland has made it his life's work to establish a permanent human colony beneath the sea. Chamberland is an author, explorer, and NASA engineer specializing in closed ecological life support systems. His passion for ocean and space exploration led him to create the Leviathon Habitat off the coast of Florida. The Atlantica Expeditions to the habitat will be the first long-term test of private citizens living beneath the sea on a long-term basis.  You can watch a video tour of the habitat, a live webcam of the habitat, or an introductory video where Chamberland himself explains the vision behind the project.

The National Geographic Channel's Naked Science program recently aired an episode titled "City Under the Sea" that featured how Atlantica will help lead to a future with permanent underwater cities.  If you missed it, the program will re-air on Thursday evening this week. Motherboard.TV also recently aired a documentary on Atlantica, which you can see below:

Stay tuned for more posts from me in the future on this exciting opportunity!

PillowNaut said…
Awesome video! 90 day goal, wow. Well that answers my question about Presley. The graphics of the intended facility looks amazing... you are such a pioneer!! (It actually is amazing, in a sad way, that we have no permanent stations for ocean monitoring.) If I am still blogging in 2012, I look forward to seeing you make videos down there... cuz I'm pretty sure you could explain hydrostatic equilibrium of a moon pool way better than these guys did...
(And I liked the Shark danger sign under water, LOL... )
17 November, 2010 05:35

Anonymous said…
Its kind of interesting that they don't have to decompress after being down there for a while. I would think even at 2 atm for a while you'd get some gas build up in your tissues.
18 November, 2010 16:14