October 11, 2010
A couple of weeks ago, I wrote about exciting my son about aviation. Well, a father-son duo from New York has taken that lesson to the extreme by sending an iPhone to space on a homemade balloon. Seven year old Max Geissbuhler and his dad Luke spent 8 months building the balloon and special housing for the camera and then sent their mini spacecraft aloft for a 70-minute-long flight that reached 30 kilometers (100,000 feet) into the stratosphere. Along the way, it captured amazing video footage. In their own words: 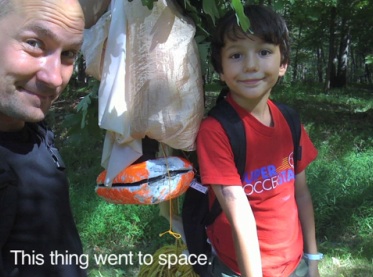 The mission was to attach a HD video camera to a weather balloon and send it up into the upper stratosphere to film the blackness beyond our earth. Eventually, the balloon will grow from lack of atmospheric pressure, burst, and begin to fall.

It would have to survive 100 mph winds, temperatures of 60 degrees below zero, speeds of over 150 mph, and the high risk of a water landing. To retrieve the craft, it would need to deploy a parachute, descend through the clouds and transmit a GPS coordinate to a cell phone tower. Then we have to find it.

Needless to say, there were a lot of variables to overcome.

And without further ado, here is the video:

All I can say is Wow!

Photos from the flight are available from the Geissbuhler's Brooklyn Space Program website.

BrianShiro said…
Details... Details. Yes, the internationally accepted definition of space is 100 km, but just look at the video
11 October, 2010 11:23