Getting my Sea Legs

August 25, 2010
Ahoy! I've had a very enjoyable first three days getting used to life at sea aboard the Okeanos Explorer.  I've gained a new appreciation for what it means to lead the life of a mariner and be a seafloor mapper.

As we sailed out of Guam's Apra Harbor, we spent the first half of day 1 conducting safety drills, which included fire, man overboard, abandon ship, and security. Man overboard was an interesting drill because everyone has to go outside and point to the victim no matter what direction the ship turned. A smaller boat was launched to go get the person, and that boat's driver uses everyone's pointing hands on the main ship to show him where to go. For the abandon ship drill, you have to don your life jacket, grab your survival suit, and meet at your designated life boat. We also tried on our survival suits to make sure they fit. Here's a photo of me wearing mine. You can see why people often call these "Gumby" suits. The purpose of the security drill was to prepare us for the event of a physical security breach like a pirate attack. I can't tell you what we did because that would reveal our secrets to the bad guys.

The other big thing that happened on the first day was the change of command ceremony. Commander Pica, who had captained the Okeanos since its commissioning in 2008, was succeeded by Commander Kamphaus, another highly competent NOAA Corps Commander. They had a brief ceremony on the ship's bow with Guam still in the background. Then, two crewmembers ferried Pica ashore in a small boat.  Typically, commands last about 2 years in the NOAA Corps.

Once the crew were all aboard, we began our northeastward journey towards Hawaii. Since the mission of the Okeanos Explorer is to map wherever it goes, we began mapping right away. I was assigned to the 4pm-midnight watch for this cruise, so I ended up working from about 9am when the drills began to midnight on my first day! It was tiring, but exciting because everything was new to me. Throughout my first night monitoring the multibeam sonar system, we drew closer to the Mariana Trench, which we crossed early the next morning.  I hope to show a 3D perspective view of our transect across the world's deepest subduction zone trench in an upcoming post.

I settled into a daily routine over the second and third days of the cruise. Since my watch is the 1600-2400 time slot, I go to bed late and therefore get up in the mid-morning. I workout, have lunch, and spend the afternoon relaxing or doing my own thing before my shift.  I brought plenty of work to keep me busy, so filling the time is not a problem.  Motion sickness hasn't been an issue for me, although sometimes I find that I do need to lie down or go outside to shake the queezy feelings away.

I discovered that running on the treadmill while at sea feels a lot like running in variable gravity conditions. The ship's gym is located under the bow, so the ship's movements are very pronounced there. At 224 ft (68 m) long, The Okeanos Explorer isn't a huge ship, so the roll, tilt, and yaw are fairly pronounced. Each time the ship would go up over a swell, it felt like I was getting heavier, and then when we went back down, I felt lighter. During my first run at sea, I thought back to the testing of the ISS's COLBERT treadmill that was done on parabolic zero-g flights. Although the sea swell is less controlled than flight parabolas, running in this situation is similar.

Although the Okeanos Explorer has a state-of-the-art satellite communication system, it's not turned on for this cruise leg, so we're left with only very slow internet most of the time. This affects my ability to efficiently write blog posts and include rich content like photos. In fact, there is a big satellite coverage hole in the central Pacific, so when we cross it, we'll be without internet altogether for a few days. I'll do my best to get another post out before we enter that communications blackout zone. 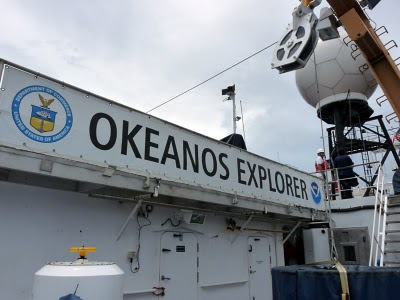 Cian said…
Thanks for the peak into the logistics and general life at the start of your oceanic science voyage. Who would have thought that in 2010 geoscientists would have to worry about the threat of pirate attacks?!

It was also interesting to read your connections between running at sea and under variable gravity conditions. It reminded me of the connections being made between the Chilean mine disaster response and the confined living conditions in space and in submarines -- important connections we can learn from in what might otherwise seem like completely different situations!
26 August, 2010 23:12

Anonymous said…
Interesting post! I like your point of view about running on a treadmill on the middle of the sea. I traveled this year on the NOAA R/V Ronald Brown and using the treadmill was always a very "interesting" experience. Funny, after sailing across the Atlantic Ocean for an entire month I returned home to find out I had significantly improved in my running capabilities, which is a great bonus.

Justin L. Brown said…
War in the Pacific National Historical Park was built up to respect the individuals who have joined in the Pacific battles amid World War II. Verifiable as it might be, this unfathomable park is an impeccable destination for chatting with families or companions. Site of Apra Harbor
09 February, 2016 05:11

I just stumbled upon your blog while idly perusing the astronaut selection timeline, then saw that you've sailed aboard NOAA ships, too. My husband is a NOAA Corps officer (and an aspiring astronaut -- he went down to Houston in September for the first round of interviews), and we are friends with Captains Kamphaus and Pica. Small world... anyway, super interesting and enjoyable blog! (It also makes me miss Hawaii like crazy -- we just moved off island in May.)
25 October, 2016 05:09

BrianShiro said…
Small world. Good luck to him and come back and visit the islands anytime!
15 November, 2016 09:06