I'm a big fan of the Discovery Channel show Man vs. Wild where Bear Grylls pits himself against nature in dangerous situations to teach viewers how to survive. I really admire Bear and am more than a little jealous at all of the fun he has doing the show.  Check out the Bear Grylls Survival Manual to learn some of his tricks or Bear's Blog to follow his adventures.

Bear is somewhat of a hero to me, and I have always secretly wanted to be his sidekick. Well, now is my chance.  The Fan vs. Wild contest will let four amateur adventurers compete in a "wilderness boot camp" for a chance to join Bear on a episode of Man vs. Wild later this year.  From the Men's Journal announcement:

If you fancy yourself an adventurer, you’re in luck. From now until April 30, you can enter for a chance to be one of four guys to take part in a wilderness boot camp led by Bear Grylls. If selected, your summer adventures — and inevitable mishaps — will be filmed from a remote location. Before your television debut, however, you’ll first have to prove yourself to a group of pro athlete mentors, as well as Grylls himself, as they assess your ability to cope with the challenges set before you.

In August, the world will watch you test your limits on a web series at www.FanVsWild.com. No sense in being bashful though — something tells us that the fear of public scrutiny will be the least of your worries once left to your own devices in the wild. This fall, one of the winning four will be featured in a special one-hour episode Fan vs. Wild on Discovery.

Visit www.FanVsWild.com to submit a photo and essay explaining why adventure is in your blood, and why you’re the best candidate for the show.

If I can survive that, astronaut training should be a piece of cake!  Naturally, I submitted an application.  I only had 1000 characters to tell them why they should select me, so I hope I was convincing.  We were allowed to submit one photo, so I made a collage of my adventures: 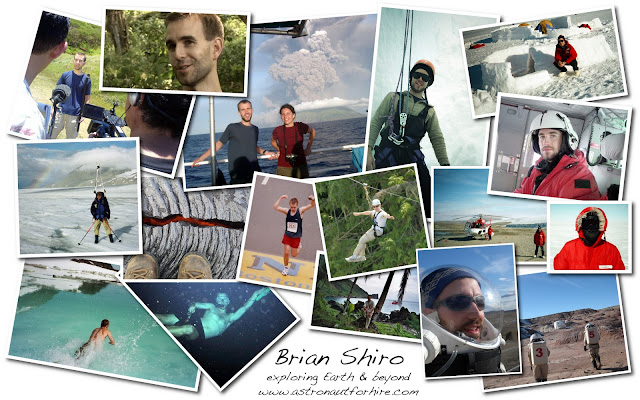 The promotion is sponsored by Degree Men. The commercial for the Fan vs. Wild contest is below:

Could this be my next adventure? Stay tuned to find out. Today is my seventh wedding anniversary, so I hope lucky number seven helps me earn a seat in the Fan vs. Wild competition.

BrianShiro said…
He eats some pretty unappetizing things on each show to illustrate what it takes to survive. Tree bark and fire ants would be among the more palatable options.
29 March, 2010 17:12

Norman Copeland said…
It would be a great opportunity for NASA's workman sector to watch a future astronaut going through the trials and tribulations of a survival test.

It would be great for all people interested in space exploration and give a significant boost to the developing american economy useing it's influence for the good of America and helping NASA continue it's legendary status!!!


[If the programme organisers are watching, I think Brian could do it with a mask on full of Egyptian lotus petals for the entire duration of the test...Lol...]
30 March, 2010 02:07