February 06, 2010
My second mission to "Mars" is now history. I think my first command experience went well, and it was truly a privilege to serve with such a fine crew. Below is the Executive Summary from our mission summary report. It'll also be a Mars Society press release later this week.

The 89th expedition to the Mars Desert Research Station (MDRS) returned to Earth today having successfully completed a two-week mission in a Mars analog environment. MDRS is located in a visually stunning, geologically rich area of the Utah desert that affords an excellent opportunity to learn how science investigations can be conducted by an isolated, self-sufficient human crew.

Through the 14-day mission, the international crew transitioned from an assortment of near strangers to an efficient, compatible, coherent team. They learned not only how to conduct operations in the remote setting but also how to live and work in the very cramped quarters of MDRS. Their research goals spanned a gamut of areas, and they discovered almost immediately that their diverse skills and backgrounds formed a complementary union. Crew 89 tackled a diverse collection of projects including astronomy, biology, geophysics, geology, image geolocation, engineering, and public outreach.

Over the course of the formal Mars mission simulation, the crew completed 20 extra vehicular activities (EVAs) in a total elapsed EVA time of 40 hrs, traveling a total distance of 130 km. This translates into a cumulative in simulation crew time of 113 man-hours and a distance of 326 km. On each MDRS Crew 89 EVA, a crewmember wore a Garmin Forerunner GPS and heart rate monitor system to gather concurrent geographic and physiological data. Crewmembers also captured geotagged photos using a Nikon Coolpix P6000 GPS-enabled camera. These technologies allowed the crew to easily combine their EVA ground tracks and photos and share the EVA experiences with the public as georeferenced slideshows via the website EveryTrail.com.

Multiple snowfalls impinged on outdoor EVA operations and limited the visibility and accessibility of features of interest. However, the crew adapted ably to this challenge, devoting a series of EVAs to building confidence for operating in the snowy field conditions. This effort culminated in a simulated rescue operation that employed a home-built sled to successfully tow an “injured” crewmember back to the Hab.

Crew Astronomer Mike Moran led three EVAs that served to double the height of the radio telescope, increasing its sensitivity for observing radio emissions from Jupiter. After hours of listening to the radio hum from the telescope, he confirmed a positive detection radio bursts from the gas giant.

Crew Biologist Luís Saraiva collected endolithic algae samples from a variety of different locations and studied the organisms in the MDRS lab. Similar extremophile organisms could exist in endolithic environments on Mars. He also collaborated with Crew Engineer Darrel Robertson in a water quality study of the Hab’s gray water recycling system.

Crew Geologist Kiri Wagstaff explored sedimentary structures in Olympus Mons and Valles Marineris, and measured a stratigraphic section at the Lowell North Sedimentary Outcrop. She also investigated the use of statistical image analysis methods to automatically assign latitude and longitude coordinates to digital images by comparing them to a database of previously geolocated images.

Crew Engineer Darrel Robertson built upon the accomplishments of Crew 88 and was able to bring the remaining MDRS Hab systems up to a fully operational state. He also designed, built, and tested an efficient water recycling shower aimed at reducing water consumption. With Crew Biologist Saraiva, he analyzed bacteria counts in water samples at every stage of the process to assure the water met safe bathing standards.

Executive Officer Carla Haroz coordinated and tracked the crew’s daily activities and participated in all of the other crewmembers’ research studies. She also worked feats of culinary magic with the restricted food options available, inventing several new meals and some especially innovative, delectable, desserts.

Despite their busy research schedule, the crew found time for recreation too. Since Mars explorers must exercise to combat the physiological deconditioning associated with low gravity conditions, Crew 89 also scheduled and executed several group exercise sessions (stretching calisthenics, Jazzercise and Capoeira) led by crewmembers Wagstaff and Saraiva. On several occasions, they watched movies and played games too. Crew Engineer Robertson used his artistic skills to create a MDRS version of the Clue board game, which is now available at the Hab for future crews to enjoy. By laughing and joking together, the crew’s partaking in these activities served as both stress relievers and means to improve group cohesiveness.

Throughout the mission, Crew 89 maintained a vibrant, active public presence via a dynamic website that include daily blog posts, Twitter updates, YouTube videos, and a Facebook group. The website also included summary maps and links to georeferenced photos for all EVAs (1-10, 11-20). Their website serves as a shining example of what is possible when a crew devotes itself to quality public outreach despite limitations of time and bandwidth. Although the mission is now over, the crew will continue to post updates as they analyze and present results from their MDRS research endeavors. Please follow the adventure at: 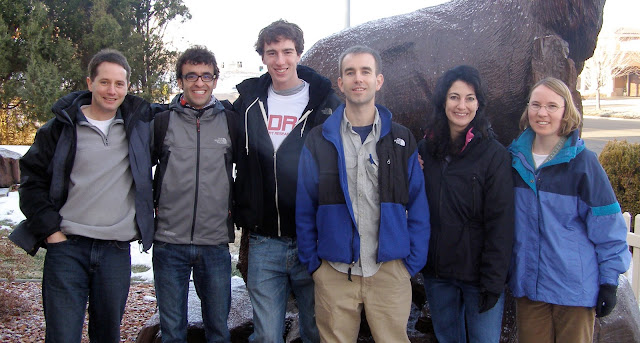 Norman Copeland said…
Thanks for being such a willing data responsive Commander, I hope I have the opportunity to continue monitering your progress to become an astronaut.

SteveandAlina said…
Congrats on such an exciting and successful mission!
14 February, 2010 12:56