January 30, 2010
Our simulated Mars mission has reached its midpoint.  In my last post, I thought that the snowy conditions here at MDRS would be just a short term anomaly in our mission. However, after 4 consecutive days of snow, my crew and I are having to re-think the strategy for our mission. When humans go to Mars, they'll also have to contend with inclement weather. Dust storms in particular could halt or severely limit EVA operations for days or weeks at a time. 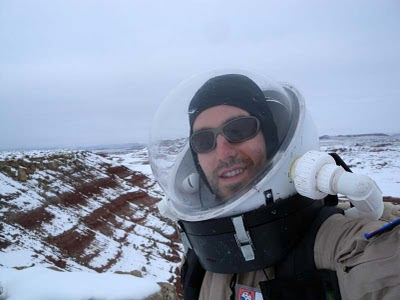 Yesterday we decided to do an emergency rescue operations EVA. Carla and I spent the morning constructing a sled out of materials we found at the Hab. The wooden sled had two runners made of PVC pipe and a rope to pull it from a rover or by hand. While we were busy carpenters, Darrel and Luis re-built and installed the carburetor for one of our rovers, Kiri edited our first two YouTube videos, and Mike got the radio telescope software working. It was a productive morning. By lunchtime, we had a sled, a nearly operational fourth rover, our first two mission videos, and were ready to collect radio astronomy data.

After lunch, Darrel and Mike set out on a pedestrian EVA east of the Hab with a nominal goal of testing GPS navigation to waypoints in low visibility conditions. About half an hour after the start of EVA 11, we received a distress call from Mike requesting help because Darrel had "fallen" and was incapacitated. He relayed their coordinates, and we programmed them into a GPS so we could find the troubled EVA party. 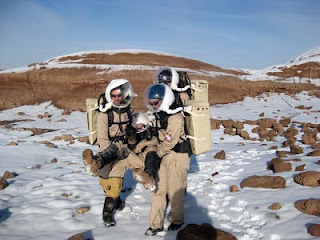 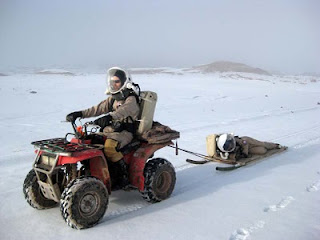 Carla, Kiri, and I sprung to action and were suited up in only 13 minutes - our shortest EVA preparation time yet. We exited the airlock at the start of EVA 12 and tied the sled to the rover. I drove while Carla and Kiri walked. We found Darrel and Mike without too much trouble, carried Darrel to the sled, and brought him back to the Hab. Luis stayed behind as our HabCom. Normally, procedure dictates never to leave anyone alone - even in the Hab, but in an emergency situation we decided it was okay to have five crewmembers out and only one at the Hab. The EVA was a worthwhile exercise, and we now have a better sense what to do if a real emergency happens on one of our cross-country explorations. We also know a rover can safely travel on the snow as long as one drives conservatively. Check out our highlight video of the exercise.

This morning after enjoying Carla's excellent egg, bacon, and cheese casserole, we got some critical emails from Mission Support about our choice of activity for yesterday. I had made the error in judgement of not consulting them first before scavenging materials for the sled. However, our crew felt their reaction was a little extreme. The clash with our remote support team served to actually strengthen our team cohesiveness. This phenomenon is well known for groups of explorers in isolation away from people in "normal" life. Jack Stuster describes this and more in his excellent book titled Bold Endeavors: Lessons from Polar and Space Exploration. Recommended reading.

We slowed the pace a little today and thoroughly cleaned the Hab (Kiri and Mike blogged about it.).  Luis and I decided to go on an EVA up on the ridge southwest of the Hab to collect more biological samples and to scout a location for my seismic refraction experiment (more on that in a future post).  The past few EVAs cumulatively built our confidence for conducting EVAs with rovers in the snow, so that's how we traveled.  Driving the rovers through the snowy chaos terrain to ascend the slope of the ridge was an unworldly experience.  I was impressed with how well the rovers handled in the snow, even on moderate slopes. 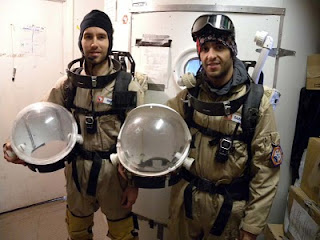 We went to the location where Crew 83 conducted a ground penetrating radar study earlier this season.  They were trying to use radar to image where an inverted channel intersects the ridge.  An inverted channel is former streambed that filled with resistive material.  Over time, erosion removed the surrounding surface leaving the former stream behind as positive relief (hence the "invereted" moniker). This is analogous to similar features on Mars and is one potential landing site for the Mars Science Laboratory.

Luis found several interesting sampling sites in the channels and small gullies dotting the upper plain.  The views from the top of the ridge were well worth the journey, and we snapped some great photos of the terrain.  Kiri further described ">EVA 13 well in the second half of her blog post, and you can follow our journey in the EveryTrail slideshow below:

All of the reports and blog posts from the past two days are summarized here:

Norman Copeland said…
A great blog, and riveting coverage, I've been watching the previous post's and wondered if the snow would effect work productivity.

Obviously most scientist's have heard of S.A.D [seasonal adverse disorder], and, I wondered if you would have some sort of dim visor on the head section of the suit to compensate for the lesser light that would be on Mars.

Moral would be severly obstructed if those circumstances had not been practiced.

On another note of personal interest in the study module of climotological effect's on behaviour and performance, I wondered if different snow brought different effects to human reation, obviously the quantities of water neutrons in the air would effect ground area pressure and certainly the base area if it was made of metal.

Professor Masaru Emoto has been doing some really interesting study on water and snowflake crystal's and their structures about how they change molecular identity with different voices and noises aimed at them. I thought that coupled with his research some sort of sound wave could create or disolve snow much quicker and with ease of control.
I have heard of scala wave technology, but, something less powerful perhaps would be sufficient.

BrianShiro said…
Norman, thanks for your kind complement on the blog.

The visor does block some light, but it is not intentionally designed to simulate the lesser solar radiation one would receive on Mars. That's a good idea. Others have suggested tinting the visor red somewhat to give the wearer a more Mars-like view.

I'm not a psychologist, but you are probably correct about snow affecting mood. When the snow is fresh, we all were excited about it and enjoyed going outside, but as time wore on we wished it would melt so we could be less encumbered. It definitely limited what we could do and where we could go on EVAs.
04 February, 2010 07:40