January 14, 2010
While the devastating Haiti earthquake was happening, I was on top of Hawaii's Mauna Loa volcano at the NOAA Mauna Loa Observatory (MLO).  Mauna Loa is the world's largest volcano, and if you measure it from its base on the seafloor, it's the world's tallest mountain too at 17,170 m (56,000 ft).  The massive mountain comprises half the Big Island of Hawaiʻi and amounts to about 85% of all other Hawaiian Islands combined.

Below is a picture of colleague Roger Gernold and me at the MLO with Mauna Kea in the background.  If you squint, you can see the Mauna Kea Observatories on the top of that mountain.  We went to the MLO to scout for a location to install a new seismic station to record ground shaking from earthquakes.  This will help us better characterize earthquakes and to issue faster and more accurate tsunami warnings in Hawaiʻi. 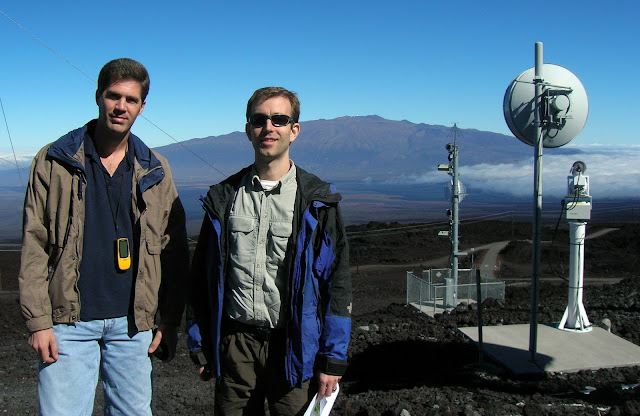 The MLO is part of the Global Monitoring Division of NOAA's Earth System Research Laboratory (ESRL). Located in the middle of the Pacific Ocean near the top of Mauna Loa at 3,397 m (11,135 ft) above sea level, the MLO is situated in a prime location for sampling the Earth's atmosphere in the undisturbed, well-mixed troposphere.  The MLO website has live webcams and a nice video showing you what it's like there. 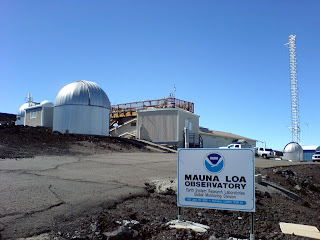 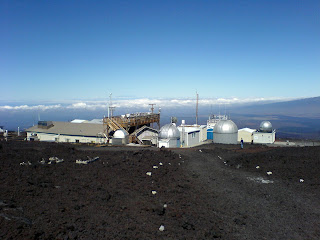 MLO is home to a number of research programs related to climate, atmosphere, and solar monitoring, but it is most famous as the site with the longest, continuous record of atmospheric CO2 in the world.  Carbon dioxide has been measured there continuously since 1958.  The famous "Keeling Curve" is shown below.  It is often called the most important geophysical record on Earth and has been instrumental in showing that mankind is changing the composition and heating the Earth's atmosphere.  The steady rise in the greenhouse gas is unmistakable, and now that it's reaching 390 parts per million, many scientists are worried about worst case scenario warming predictions.  The seasonal fluctuations are clear too.  As plants grow during summer, they absorb carbon dioxide from the atmosphere, but in winter, the CO2 concentration rises as vegetation decomposes.

In 1965, Apollo astronauts came to Hawaii for training and visited MLO. Among them were Buzz Aldrin (Apollo 11, Gemini 12), Alan Bean (Apollo 12, Skylab 2), David Scott (Apollo 9 & 15, Gemini 8), Charles Conrad (Apollo 12, Gemini 5 & 11), Richard Gordon (Apollo 12, Gemini 11), Don Eisele (Apollo 7) and Roger Chaffee (who was in the Apollo 1 tragedy).  You can see their signatures in the MLO guest book below.  As a MLO visitor, I signed this book too.  Maybe one day I'll earn the opportunity to follow their footsteps into space.