December 11, 2009
Things are shaping up for my second mission to analog Mars. This time I'll be headed to the Mars Desert Research Station (MDRS) in Utah for a 2-week expedition from 23 January to 6 February 2010. I will serve as Commander with a crew of five other highly capable and talented scientists and engineers.  We will be the 89th crew to inhabit the MDRS since it's founding in 2002.
Kiri has set up a crew website where we'll maintain a blog. Of course, we're also on the major social networks: Twitter, Facebook, Flickr, and YouTube.  As with all MDRS crews, our daily reports and select photos will be posted to The Mars Society's website. Luís designed our crew patch, which I think looks very nice.  It incorporates most of our research themes.  We may still tweak it a little more before finalizing the design. 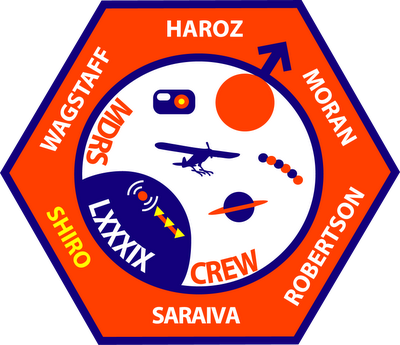 Our research plans are shaping up too.  Mike plans to study variable stars and exoplanets using the Musk Observatory. Darrel plans to fly a micro air vehicle to provide aerial reconnaissance prior to EVAs and maybe test an inflatable habitat structure. Kiri will test algorithms to automatically geolocate photos using a statistical analysis that computes the similarity of new images at unknown locations with old ones at known sites. Luís will oversee an ongoing environmental impact study to measure soil compaction, pH, and E. coli at field sites surrounding MDRS in order to quantify the impact of MDRS operations on the landscape.  He'll also study cellular and genetic biomarkers in the soil.  I will do an active seismic survey of the subsurface using a towed land streamer system on generous loan from Exploration Instruments and may test components of a prototype space suit from the UND Space Suit Laboratory. Carla will try to coordinate and manage all of these activities into an EVA plan that we can accomplish in our short 2-week mission.

For an introduction to the MDRS facility, I recommend you watch the video tour of MDRS below.  MDRS Crew 75 made it in the style of MTV Cribs; It has a lot more flair than my similar video showcasing the FMARS Hab. Crew 75 was quite prolific with their YouTube videos, which covered all 50 of their EVAs (yes, 50!) and then some. There are also several live MDRS webcams, so you can spy on us during the mission.

MDRS Crew 64 was also very adept with with the video camera, and I really like their Mars Society promotional video. If you're wondering why we're doing this work, just watch the video below and see for yourself.  For more inspiration, check out the stunning images in two recent Boston Globe Big Picture galleries of Mars photos here and here.