A tsunami kind of month

November 04, 2009
With last month's earthquakes and tsunamis in Samoa on Sept. 29 and Vanuatu on Oct. 7, the spotlight has been on my workplace. The Samoa event produced the first tsunami casualties on American soil since the 1975 Hawaii tsunami. 34 people died in American Samoa and about 160 more in neighboring Samoa. This has spurred a lot of recent visits by the news media, school groups, concerned citizens, and several government review panels. The tsunamis were also popular on Twitter. CNN.com even wrote an article about me that was their top story for a few hours. I usually keep this blog focused on my astronaut aspirations, but today I'll break tradition and write about my job.

For the uninitiated, I work as a Geophysicist at NOAA's Pacific Tsunami Warning Center (PTWC) in Ewa Beach, Hawaii. I have been here 4 years and in that time have gained a great deal of experience during more than 10 significant tsunami events.  Founded in 1949, PTWC was the world's first tsunami warning center.  Since the deadly 2004 Indian Ocean tsunami, the tsunami warning system has been expanding rapidly.  At PTWC, we now serve about 130 countries, states, or territories in the Pacific Ocean, Indian Ocean, and Caribbean Sea.

First, you may be wondering what exactly a tsunami is (not weather!). A tsunami is a series of very long-period waves that involve motion of the entire water column from surface to seafloor. They are caused by anything that displaces a large volume of water in a short period of time. Typically, the sources of tsunamis are underwater earthquakes that are large enough and shallow enough to deform the seafloor, thus displacing water. The second most common tsunami sources are landslides, which are often triggered by earthquakes. Tsunamis can also happen due to eruption of volcanic islands, icebergs calving into the ocean, and asteroid impacts into the ocean. Hollywood likes to play up the asteroid scenario in movies like Deep Impact, but such an event probably hasn't happened in recorded history. Once the water has been displaced by one of these sources, gravity pulls it back down to the equilibrium point, and this causes the oscillations that become the tsunami.

Tsunamis are fast. In the deep ocean they travel about 600 miles per hour - about the same speed as a commercial airliner. In deep water, tsunamis don't look very impressive since their amplitude may be just a few inches, about the same as the swell of normal ocean waves (which are generally caused by wind). However, when tsunami waves approach shore, they slow down dramatically. This causes the water level to grow in height because all of the tsunami energy starts to pile up on itself. Think of it like a rug getting pushed along a hardwood floor and then someone stops one side of the rug. The waves in the rug quickly pile up on each other as the rug gets compressed into a small area. This video illustrates the concept nicely:

Tsunamis may be speedy, but they're not nearly as fast as seismic waves. That's why the tsunami warning system relies heavily upon seismic data to determine whether a given earthquake is likely to cause a tsunami. At PTWC, we wear two pagers that alert us when our software detects an earthquake somewhere in the world. We quickly determine where it happened, how deep it was, and what the magnitude was. If its too deep or small, it's not a tsunami concern. If the event passes certain criteria, we'll issue a tsunami message. This alerts recipients that an earthquake has happened and gives some assessment of its tsunamigenic potential. For events large enough to warrant isssuing a warning, we'll pay close attention to sea level gauges to see if they pick up any unusual wave activity. We also run tsunami simulation models to forecast the expected wave height around the ocean basin. All of this information helps us decide whether to continue, upgrade, downgrade, or cancel a warning. 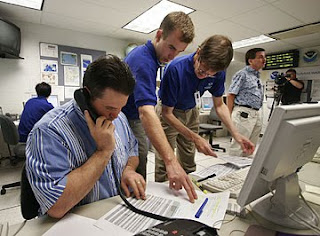 A tsunami warning is definitely the most exciting part of the job. The adrenaline gets pumping, and you have to quickly assimilate information to make important decisions that can affect public safety. This involves calling emergency management officials in states all over the world and interacting with the media, who never fail to bring a deluge of calls into our center. It's a high-stakes job, which explains why the 12 scientists who work here need to be experienced. We always have two people on duty to staff our center 24-7. At least one person is awake in the office at all times; the other can be on standby in one of several on-site quarters. On each shift, the more senior duty scientist is designated the lead with responsibility over the more junior one. We're a mix of geophysicists and oceanographers.

Of course, most of the time, there aren't damaging tsunamis sloshing around the oceans. A typical day involves working on projects to improve operations or advance research that could one day improve operations. This is why most of us are seasoned computer programmers and scientists. My main projects includes scouting out new locations to install seismic stations around Hawaii, managing PTWC's website, talking to schools for outreach, and expanding the options for communicating tsunami messages with partners and the public. With two of my co-workers, I take turns operating the USGS's Honolulu Geomagnetic Observatory about 4 months out of the year.  Below are a few pictures of me being interviewed for a local TV station, giving a public tsunami lecture, and driving a jeep on Lanai looking for a good spot for a new seismic station:

The job is challenging, and it's rewarding knowing that I am doing something to help people. I also like the freedom I am granted to spend my time however I need to in order to accomplish my goals. Working 24-7 shifts is not fun, and it's hard to always be bouncing from one sleep schedule to another (We don't maintain a set schedule for an extended period of time; instead we cycle through three shifts every week.). I also don't like being under so many levels of bureaucracy in the government. It makes progress very slow most of the time. However, all in all, I'm happy to have such a stable and interesting job during this uncertain economic time. 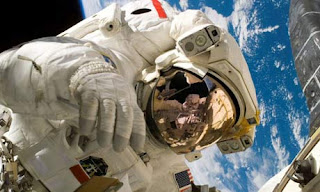 I think working at a tsunami warning center is very relevant experience for an astronaut hopeful like me. One common theme I hear over and over again is that NASA wants people with "operational experience." Operating a tsunami warning center requires many of the same skills that someone would need operating a submarine, for example. It takes a crew working around the clock to keep things running smoothly. When things break, people must think creatively so solve problems in a timely way. When springing to action, we must remain calm and follow procedures as we've been trained. After all, lives could be at stake.