Kranz and Haise reminisce about Apollo 13

April 16, 2009
One of the things I've enjoyed most about having this blog is getting to meet so many great people. One of these people is Heather Archuletta, the author of a really interesting blog called Pillow Astronaut. She works in bioastronautics at NASA JSC and was a subject in a 2008 NASA bed rest study on the long-term effects of microgravity on the human body. Her blog focuses on that and other space-related topics. Heather did me the honor of mentioning me in a recent post, so I'm returning the favor for her today. The name Gene Kranz conjures instant recognition among any true space cadet. Sporting his signature crew cut and vest, Kranz served as Flight Director for nearly every spaceflight from Mercury 1 through Apollo 17. As he described in his book, he kept his cool in many difficult situations, most notably the Apollo 13 disaster. 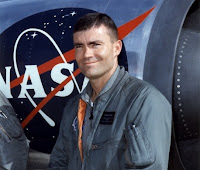 What does all of this have to do with pillownaut? Well, she had a front row seat in a recent presentation featuring both of these legendary figures talk about their experiences during Apollo 13. Her two blog posts (post 1 and post 2) anecdotally describe the event and her impressions of it. She also posted a few photos on her Picasa Web Album and four videos of the Kranz-Haise lecture on her YouTube channel. The longest video clip of the exchange between these two NASA figures (video 2) is included below:

The other three videos feature Kranz introducing the Apollo 13 mission (video 1), Haise talking about taking pictures of the Moon (video 3) and Haise boasting about the accuracy of their eventual splashdown (video 4).
astronaut NASA space