My great-grandfather and Lindbergh

March 21, 2009
I've been in my hometown enjoying some quality time with family and friends over the past week. One evening, my dad and grandmother showed me some old aviation photos taken by my great-grandfather when he was a mechanic in the Army Air Corps during the 1920s and 1930s. Several of the pictures featured Charles Lindbergh when he came through Little Rock in 1927.

My grandmother's family moved all over the country when she was a girl and eventually ended up in Louisiana and later Arkansas. Her dad was named Fred McGinnis, and as a Staff Sergeant in the 154th Observation Squadron of the Arkansas Air National Guard, he served a Crew Chief on many types of aircraft (mostly open cockpit biplanes) during the aviation's barnstorming days. Below is a picture of him (front center) with his squadron in 1932. 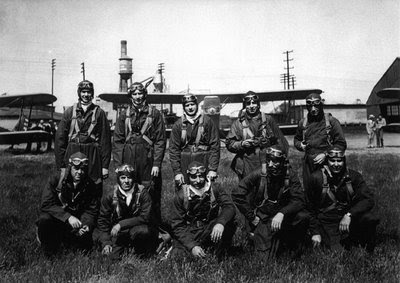 My great-granddad (called "Mac" by his friends) was a mechanic, pilot, and skydiver. The picture below shows one of his jumps in 1926.

After retiring from active duty, my great-granddad worked as an inspector for the FAA from 1934-1964. One of his main responsibilities with the FAA was helping create and maintain runway lighting systems for airports. The photo below shows what happened on one of his earlier flights trying to land at 10:00pm with no lights. My great-granddad's plane (an O-2H) landed okay, but his friend (Ellis Fagan) crashed in the ditch short of Toney Field in Pine Bluff, Arkansas. The photo's caption gives no date but reads that this was one of the first attempted night flights. 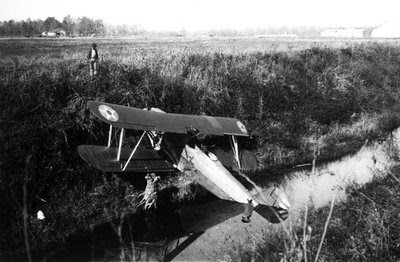 After Lindbergh's historic 1927 trans-Atlantic flight, he flew the Spirit of St. Louis on a 3-month tour of 92 cities in 48 states across the US. Lindbergh landed in Little Rock, Arkansas on October 1, 1927 for a 2-day trip. The photos below show Lindbergh leaving his plane, being greeted by the Little Rock Mayor and other local dignitaries, and in a parade through downtown Little Rock. These pictures were also some of the source material in a recent book on Lindbergh's cross-country tour.

It's not clear if my great-grandfather worked on Lindbergh's plane or not, but the following photo shows him (left) and someone named Bridges posing in front of the famous aircraft during Lindbergh's 1927 visit to Little Rock. 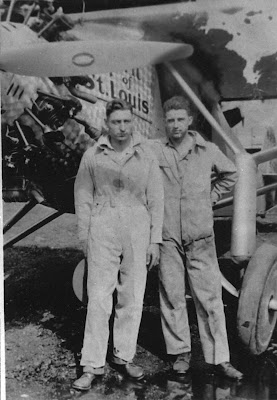 There are lots of other pictures of old aircraft that I could show, including Navy racers, air mail planes, the 1926 National Balloon Race, the Martin Bomber, and the Barling Bomber. Maybe I'll share them in a future post.
aviation personal
Location: Paragould, AR, USA

George said…
Quite the aero pedigree you have! Thanks for sharing. Great photos. Amazing to realize that aviation has been around for a century.
09 April, 2009 09:50