February 18, 2009
The question whether liquid water can exist on the surface of Mars may have been answered by the Phoenix Mars Mission. A study by Nilton Renno and 21 coauthors will be presented at the upcoming Lunar and Planetary Science Conference near Houston. Their abstract outlines the thermodynamics why liquid water can exist at the surface under the right conditions and shows a series of images that seem to be water drops on the Phoenix lander.

Regular water cannot exist on the surface of Mars due to the low temperature and atmospheric pressure. If you placed a glass of water on Mars, it would immediately sublimate into the atmosphere and vanish. However, the presence of salts in the water can depress the freezing point temperature and reduce the vapor pressure of the solution. The concentration of salt that produces the lowest freezing temperature is called a eutectic mixture. For some saline solutions, the eutectic can be as low or lower than 200 K (-73 C), which is near the surface temperature during a Martian summer. Renno and his coauthors argue that over many free-thaw cycles, the concentration of salt in solution is driven towards this eutectic value, leading to briny layers a few centimeters beneath the surface. They suggest that the likely salt in question on Mars are magnesium percholrates, which have freezing point depressions of about 70 degrees. Figure 1 from their abstract illustrating this concept is below. 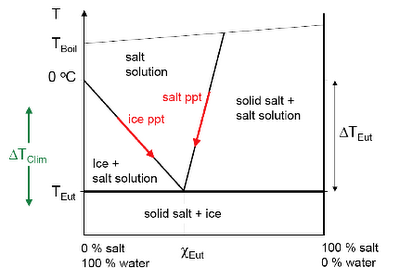 So far, everything I've told you is theory. The exciting part is the observation of possible water drops on the Phoenix landing strut. The figure below shows the strut on Sols 8, 31, and 44. Most of the spheroids (possible water drops) on the strut grew from Sols 8 to 44, and two of them (in the white box) seemed to have merged with each other between Sols 8 and 31. The resulting larger spheroid then moved downslope along the strut. The authors claim that the "smoking gun" that this was indeed liquid is the fact that growth in spheroids left behind by the moving one was inhibited. The authors also hypothesized that the spheroids freeze in the evening and melt each morning.

Obviously, this is a potentially important discovery. If Mars has liquid water, it could support life as we know it. For more discussion on this finding, also take a look at New Scientist and Universe Today.
Mars