October 10, 2008
It's hard to believe that five years have passed since my wife and I changed our names to "Shiro". This month marks the five-year anniversary of when I made the name change decision public. In this rather personal post, I'll highlight why I changed my name how it's affected my life. 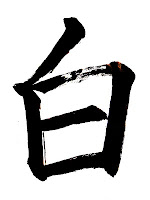 For those of you who don't know me personally, I spent my first 25 years named "Brian White." When we married in 2003, my wife and I were at a bit of an impasse as to what to do about our names. Ostensibly, we both preferred to keep our names, but we also strongly wanted to have the same name since if we ever had kids we wanted the whole family to have one name. We considered many options such as hyphenating our names, merging our names, and thinking of new names. In the end, we chose to morph my name from English to Japanese since my wife comes from a Japanese family. That's how we arrived at "shiro", which is the Japanese word for "white." By taking our new name to be "shiro", I showed a willingness to incorporate her background while still technically keeping my name since it means the same thing.

Most of my friends and family had very positive reactions to the name change decision, but I did find a wider range of reactions from those in older generations. After a while, everyone accepted the change, and there was a lot less resistance to the idea than I would have predicted. As a male in a patriarchal society, it took courage for me to undergo the name change process. I found a real double standard between how males and females are treated with regard to name changes. When women get married all they need to do is fill out a simple form at the social security office to take their husband's name, but for a man to change his name takes a lot of paperwork, time, fees, and going before a judge to justify why you want to do it. 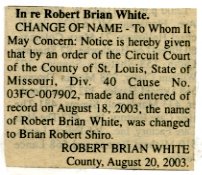 The image shown here is the official record that was in St. Louis newspapers announcing my name change. An astute observer will notice that I also swapped my first and middle names. I got tired of using my middle name as my primary name, so while I was changing my name anyway, I thought I might as well fix the first/middle name issue. This had the desired effect since there is a lot less hassle now when it comes to forms, etc., so I'm glad I did it. I must admit, though, that I do have some regrets about it since it is the name my parents picked out for me, and going by one's middle name isn't all that uncommon.

First the good news. Choosing a shared name that my wife and I both wanted has been extremely rewarding, and it helped to solidify our commitment to each another. I believe it deepens our relationship and promotes greater family unity. We don't have any long hyphenated name to worry about and weren't faced with the difficult decision of what last name to give our son when he was born had we kept different names. Furthermore, I think our choice inspired some friends and co-workers to change their names too since I know of six couples who married after us in which the man changed his name somehow. Later on in this post, I'll get into that in more detail. Finally, as far as I can tell, I'm only one of two Brian Shiro's in the US, and I like that uniqueness compared to my previous much more common name.

Now the not so good news. As with anyone who changes his or her name, there is a period of adjustment where one must learn a new signature, change the name on accounts, and get accustomed to introducing yourself differently. While most of the administrative and mechanical aspects of that process only took about three months for me (August-October 2003), I must admit that I am still not 100% used to introducing myself as "Brian Shiro." Interestingly, I've noticed that I now have a much greater tendency to just give my first name instead. As a Caucasian man with a Japanese name, people just don't expect someone with a name like "Shiro" to look like me. On the US mainland, people tend to mispronounce it and ask me to repeat or spell my name. It's not a common name in the US, so that's an understandable reaction. When I moved to Hawaii three years ago, I wasn't prepared for the degree of racial stereotyping and prejudice that I would encounter. Here, "shiro" is a well-known name, so there are no problems with pronunciation or spelling like in the rest of the country. However, I am always having to explain myself to people - often complete strangers. This can range from the store clerk suspiciously double checking my ID when I buy something to a business contact whom I just met probing into my family history. People never seem to fathom that someone like me could have a name like "shiro;" for all they know, I was adopted by a Japanese family or had a Japanese grandfather. I must admit that all of this gets on my nerves, and sometimes, I glaze over the truth just to move the conversation onto more substantive matters.

If any of you couples out there are inspired to go beyond the conventional name-changing options as I did, here is a fun exercise illustrating some of the possibilities. Let's assume some kind of temporal anomaly brings the crews of the Enterprise and Voyager together. Being the ladies man that he is, Captain Kirk then marries Seven of Nine. Let's use their real world names (William Alan Shatner and Jeri Lynn Ryan) to see what the options are in 10 different scenarios:


#1 is the most common path people take by far. It's the way our legal system is set up, and any other option takes more work. #2 and #3 are also pretty common, especially when the woman has already established herself in her career or otherwise prefers not to give up her name completely. #4 is less common in society as a whole, but it does happen more among people in the academic community who value equality for both partners. #5 is very rare in our society, but I do know one couple who has done this. #6 and #7 are interesting twists using middle names. I know couples in all of the categories #1-7. #8-#10 are all various methods of choosing a new name altogether. That could be from merging the partners' two names (8), reusing an old family name like a mother's maiden name (9), or translating either partner's name into another language (10), which is what I did. This list isn't necessarily comprehensive, as there are many other combinations, permutations, and completely new twists couples can take on choosing a new name.

Sorry for the random post, but I had to comment after I just happened upon it. I was given two first names. My mother is American and my father is Japanese. They named me Shaun-Hiro, but somewhere along the way they started calling me Shiro. I just thought that was interesting considering your post.
25 March, 2009 19:06