Congratulations to China and SpaceX!

September 29, 2008
I just wanted to highlight two big achievements in spaceflight that happened over the past few days.

With ambitious plans to build a space station and go to the Moon, China is well on its way to making great strides in its manned spaceflight program. This has sparked some speculation of a new space race for valuable lunar resources. Who will be first to make it back to the Moon? China, the US, or a private company? 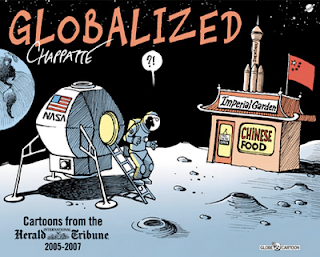 Speaking of private companies... The second big news in space this week was the successful launch to orbit of the SpaceX Falcon 1 rocket from its launch site in Kwajalein on September 28. This was the first private rocket to orbit the earth and is an important stepping stone to the upcoming Falcon 9 launch in early 2009. SpaceX is vying for the $278 million NASA COTS Award to provide a commercial cargo and crew launch service to the ISS. Click the image below to watch a video of the Falcon 1 launch.


Wow, this is a great day for SpaceX and the culmination of an enormous amount of work by a great team. The data shows we achieved a super precise orbit insertion — middle of the bullseye — and then went on to coast and restart the second stage, which was icing on the cake.

Anonymous said…
i came across your blog via linkedin. great job Brian! here people in China are really excited about Shenzhou VII :)
03 October, 2008 00:44

BrianShiro said…
Nischal, thanks for the compliment and your post that helped me get my static pages going.