July 14, 2008
I was driving through Anchorage listening to Diffusion Science Radio on a local educational talk radio station when I heard a song that just blew me away. The song's called "Pi-Man!" by the Australian indie rock band Unicron's Revenge.  You can listen to or download the full song on the band's website or listen to it right now!


Sell music on itunes at ReverbNation.com

Here is an excerpt of the lyrics:

If a song dedicated to the power to pi isn't enough to get your geek juices flowing, the fact that the band is called "Unicron's Revenge" should.  As any true Transformers fan would know, Unicron was the evil planet-eating antagonist from the 1986 Transformers: The Movie. Unicron was famously portrayed by Orson Welles in his final film role.

An inspection of the band's myspace page reveals that their top two influences include Transformers and Danger Mouse, which are also two major influences from my youth.  Oh crumbs!

Their myspace bio describes their Cybertronian roots and how they ended up singing in Sydney:

We came from the Planet Cybertron many many eons ago in an attempt to save the human race from the Evil Decepticons. Sadly by the time we got here the Autobots were already here and already had plans to complete this task.

Devastated, down and not bothered to go back to Cybertron, we decided our next course of action would be to write music as a form of release for our alpha cyber-whatsits, ... 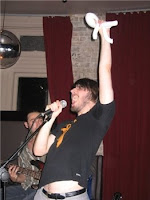 This picture on the left shows the band's lead singer Tom holding up Pi-Man. Notice the resemblance to Danger Mouse?.

I'm going to have to add Unicron's Revenge to my playlist along with one of my other favorite albums: the Transformers soundtrack.  This band deserves a spot in anyone's punk/indie music with a flavor of math/transformers/secret agent mouse collection.  If you ask me, they belong on the soundtrack to the next Transformers movie.

Pi-Man! (not to be confused with this guy)